Theodore, known as Teodor in the Japanese version, is a non-player character from Persona 3 Portable. He is the younger brother of Elizabeth and Margaret, and the older brother of Lavenza.

Theodore has a similar appearance of Kanji Tatsumi, but with white hair and yellow eyes. He wears a black-collared and long-sleeved shirt under a blue suit complemented with a blue necktie. He also wears black pants with blue lines running through the sides, black shoes, and a hat similar to a flight attendant or even a bell boy. He also carries the Persona Compendium.

In concept art, his face and hair were redrawn multiple times. Theodore is drawn in contrast to Elizabeth who uses the elevator girl concept, Shigenori Soejima gave Theodore the bellboy motif.[1]

In Persona Q: Shadow of the Labyrinth, he wears a heart-shaped pink apron with a strawberry at the bottom, which was given to him by Elizabeth.

In Persona Q2: New Cinema Labyrinth, he wears a theater popcorn mascot costume. He only dons this costume as a merchant; When battling the party, he uses his default Velvet Room outfit.

Theodore is a polite and serious young man. Despite his seemingly taciturn disposition, he is actually quite a show-off to the protagonist whenever he requests her to escort her in the outside world and, through this attitude, his naïveté greatly shows, usually with humorous repercussions.

Though nothing is shown of Theodore's interactions with his sisters in P3P, some of his quests briefly hint at his relationship with them. Elizabeth's presence (or even just the thought of her) is implied to make him wary, as shown in Request #28 (which gives the task of finding a drink of Elizabeth's namesake), where he states that the "Queen Elizabeth" gives him a chill down his spine, leading to his decision of not drinking it. Additionally, his naïve and vulnerable nature is hinted at more during Request #63, where he mutters to himself of the time when "they" (hinting to Margaret and Elizabeth) fed him dog food (during which he had no knowledge of). He trusts his sisters' knowledge concerning the outside world, sometimes to the point of gullibility; he is fooled by Elizabeth telling him that cola is an ebon monster compressed into a metal cylinder, waiting to be released in order to be sprayed into the eyes of others. Elizabeth's disrespect towards him is further shown in the Q series, where she often forces him to wear strange costumes when he is in charge of a service. The only Velvet siblings that don't treat him in a disrespectful manner are Caroline and Justine (Lavenza).

Like his sister to the male protagonist, Theo develops feelings for the female protagonist as they spend time together around Port Island. The result, though, is tragic: due to Theo's duties as the Velvet Room's attendant, he is forced to break off the relationship.

When Theo challenges the protagonist, his politeness is still shown, prompting the player to fight as if she wants to kill him. He also apologizes to her when he attacks and lands a hit. Despite his politeness, he won't think twice in using Megidolaon when certain easy to achieve requirements are met.

Theo can be found when the player pursues the female protagonist path after the appropriate choice is made. Aside from his usual requests, Theo will also tell the protagonist when there is a person who is stranded in Tartarus within a set range of floors. He can replace Elizabeth as Igor's assistant. He serves as one of the ultimate bosses for the female protagonist's path, the other being Margaret. Similarly to Elizabeth, he will repeatedly assault with a 9999 damage Megidolaon should the protagonist be immune to a certain elemental attack or status ailment.

Some of his requests will require the female protagonist to take him to specific locations in the real world, considered dates. It is unknown whether or not this can be considered canon. Throughout his dates, he proves that he is very proud and modest, pretending to know everything there is to know about everything. He can determine the secret ingredient in takoyaki just by the smell of it, and can tell the temperature of water just by feeling it. He is not as humorous as Elizabeth, and most of his humor stems from his seriousness about his knowledge. He repeatedly asks Igor to install crane games and escalators, et cetera, into the Velvet Room, but always fails.

Theodore appears during the story, asking his sister Margaret about what is happening with mankind and where their sister Elizabeth might be, mentioning that it is normally forbidden for them to leave the Velvet Room and abandon their duties. Margaret tasks him with finding one hundred cans of cola in order to get him to venture to the earth and beyond the Velvet Room. He then asks his sister if he can see what's going on outside, which Margaret tells him he must decide on his own, leading him to choose to see the events happening in Inaba. He overhears a conversation between Labrys and Ken Amada concerning resolve and introduces himself as Elizabeth's brother. He later meets most of the Persona users when they decide to split up after encountering Shadow Labrys and learning of Sho Minazuki's past, popping out of a coffin and shocking the group. He introduces himself to those who don't know of him and reveals he was tracking his sister when he came across them.

He asks them why they are fighting even though they are injured and exhausted, but comes to the realization himself. He decides to leave after learning what he needed, but returns to let them know the coffin is a door that will help them reach the top of the tower faster. He meets Labrys again near the top of the tower and mentions he is no longer searching for his sister and now is looking for something he must find himself, which the group taught him. He has started to realize something as he watched Labrys and the group along with their bonds, and that Labrys has likewise grown thanks to the experiences she has had since entering the Red Fog to save her friends. He tells her farewell as she goes on ahead.

In the True Ending, he arrives after the battle between the protagonist and Sho Minazuki, lamenting how he was too late. He then reveals to Margaret he had gotten all 100 colas, disassembled the machines they were in, put in tens of thousands of yen, and then put them back together. He reveals to her what he had learned while trying to look for their sister, and impresses her with what he learned. Though he sought to strengthen the bond between them by sharing cola, Margaret tells him that they should return to the Velvet Room, leading him to follow her back as the tower crumbles.

Theodore, along with Nanako, Marie, and his sisters, is also available as a DLC Navigator for $3. The DLC Navigators do not have additional skills, but can replace Fuuka's or Rise's voice to provide vocal support by selecting them from the "Support" section of the "Party" menu.

Theodore runs the in-game shop, which appears as a snack booth in the main lobby of the game's cinema. He takes over the store from Nagi after the P3P Heroine joins the party, and Elizabeth forces him to wear a popcorn cup outfit as a merchant in order to give the store a more festive look. After clearing a sub-quest that requires hunting down a shadow in Kamoshidaman's bottom most floor, he will also battle the party.

Theodore can only be chosen and subsequently fought by the female protagonist in Persona 3 Portable. Theodore's Personas are different than Elizabeth's during the optional fight, solely using Abrahamic Personas, but the skills used are entirely identical. He also cannot be Downed by a Critical attack, thus preventing the female protagonist from initiating a One More.

Like the battle with Elizabeth, he uses a set pattern of Personas that he will summon during the battle. The order of the pattern is: Uriel, Gabriel, Michael, Raphael, Sandalphon, Lilith, Abaddon and Beelzebub. Theo uses Personas that are both Devils and Angels, the first five consisting of prominent angels and the latter three being prominent devils. Additionally, if the female protagonist breaks his rules (which are the same as Elizabeth's), he will summon a Beelzebub to fully heal himself then kill the party with a 9999 damage Megidolaon.

Theodore is fought alongside Elizabeth and Margaret as the ultimate boss of the game. This request can only be accessed once the player has completed both the Persona 3 and Persona 4 routes.

During the battle, Theodore plays more of a support role while his sisters cycle between various elemental spells. He alternates between physical attacks and debuffs, but will prioritize using Patra and Mutudi whenever any one of the combatants are inflicted with ailments or Binds respectively. Repeatedly keeping the ailments on them will mean he spends fewer turns attacking or debuffing the party. 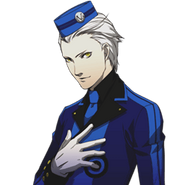 Theodore with both protagonists and Elizabeth 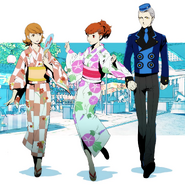 Theodore with Caroline and Justine

Theodore being pushed by Koromaru

Theodore with the group 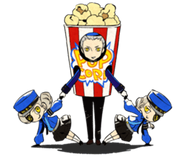 Theodore in the end credits

Theodore in the end credits 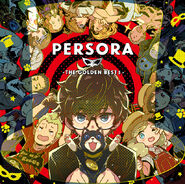 Theodore on Persora -The Golden Best 5-