Thanatos is a demon in the series.

Thanatos is the personification and god of death and mortality in Greek mythology. He is commonly known as a harbinger of peaceful death, bringing the eternal sleep of death to the world while more violent gods were responsible for harsher death. He did not play a major part in Greek mythology and rarely appeared in any stories, as he was mostly displaced by Hades, the god of the underworld.

In the Greek poem, Theogony, Thanatos (Greek: θάνατος, Death) is one of the sons of Nyx and Erebus and is the elder twin brother of Hypnos. In the earliest mythological accounts, Thanatos is the harbinger of peaceful death, bringing eternal sleep to the world. Characterized as indiscriminate and merciless, Thanatos is detested by all and he hates them in return, all too happy to bring mortals to their fated end. Thanatos is perceived by Greek poets as a fearsome, sword-wielding, shaggy bearded specter and fierce of countenance. He is a harbinger of suffering and grief, and his coming was marked by pain.

In later eras, Thanatos is portrayed again as an angel of death, associated more with a gentle passing than a woeful demise, guiding mortals after their death. Many Roman sarcophagi depict him as a winged boy, very much akin to Eros. His Roman counterpart is Mors, who was known through his later gentler depiction.

Thanatos can be found in the central area of the Ingress in the Womb of Grief, but due to the layout of the level, he can only be reached after the protagonist as explored a vast majority of the Sixth Sphere, while requiring the assistance of several apps along the way, including Floor Search. Like other demons sealed in the Womb of Grief, freeing Thanatos will unlock him for fusion.

The god of death in Greek mythology, also known as the Grim Reaper. He is the son of the night goddess Nyx, and the twin brother of the sleep god Hypnos. When it's somebody's time to die, Thanatos first dedicates their life to Hades, king of the Underworld, by cutting their hair with his blade. When he is finished, he takes them.

He is said to walk amongst men, clothed in a black robe and carrying a blade."
—Akuma Zensho

Thanatos appears as the boss of the Thanatos Tower in the Snow Queen arc, as the Persona of Yuriko Yamamoto. Yuriko takes Thanatos' form when the party refuses her offer to give them eternal youth by killing them.

In battle, Thanatos is aided by eight tentacles. These tentacles are the only enemies in the game not classified under an Order. Once Thanatos has been defeated, it will assume the form of an eyeball which can only cast the Hell Eyes skill.

Thanatos is the sole member of the Reaper Order in the PlayStation version of the game. His Order was changed to Tyrant in both the Japanese and English versions of the PSP port.

"The Greek god of death, he is the son of Nyx and the brother of Hypnos. He is depicted as a young man with an inverted torch and wreath or butterfly in his hands."
—Persona 3 compendium

Thanatos is the ultimate Persona of the Death Arcana in Persona 3. It first appears near the beginning of the game, when the protagonist first attempts to summon Orpheus. Thanatos emerges from Orpheus' head, ripping Orpheus apart and mercilessly slicing apart the Arcana Magician looming ahead. Later, the protagonist can gain access to Thanatos after the Social Link with Pharos is completed.

Thanatos' fusion prerequisite requires all the other Personas of the Death Arcana, namely Loa, Pale Rider, Samael, Mot and Alice to perform a pentagon-spread fusion in the Velvet Room. Thanatos also grants the equipment Ring of Darkness, which repels Darkness-based attacks, as his Heart Item.

Ryoji Mochizuki's true form as Death looks identical to Thanatos, seeing that Thanatos can be the manifestation of Ryoji's friendship with the protagonist during his form as Pharos.

Thanatos' role and attribute remains relatively the same from the original game. However, the fusion prerequisite now requires an additional Persona, namely Ghoul, an exclusive Persona of the Death Arcana in Persona 3 FES to perform a hexagon-spread fusion in the Velvet Room.

In the playable epilogue of Persona 3 FES, titled the Answer, Thanatos can also be summoned in the Velvet Room by Aigis through normal fusion.

Thanatos now serves as Elizabeth's Persona. He is the only Persona in the game that is capable of using all the Elemental Spells.

Thanatos is one of the DLC Sub-Personas, which can be downloaded for $2. His unique skill is Door of Hades, which hits all enemies with a heavy Almighty attack, with a high chance to instantly kill, once per turn for three turns.

"A Persona of another story. The Greek god of death, he is the son of Nyx and the twin brother of Hypnos. He is known to provide mortals with a peaceful death."
—Persona 5 compendium

Thanatos, along with his Picaro version, is one of the DLC Personas, available for $2.99 and retains the unique skill Door of Hades.

Thanatos can be obtained via the Legacy DLC bundle and has the Iron Heart trait, which halves the SP cost of all magic skills during a Baton Pass. Also, by transferring Alice's trait "Just Die!", the game recognizes Door of Hades as an insta-kill skill, reducing it to 0 every time.

Lord of Vermilion Re: 2

Thanatos appears alongside Pallas Athena, Izanagi and Messiah as one of the Personas featured in Lord of Vermilion Re: 2, once again serving as Elizabeth's Persona. Thanatos enables Elizabeth to use Megidolaon, which is considered a Physical Ability in the game.

Thanatos appears alongside Izanagi, Jiraiya, Tomoe, Konohana Sakuya, Take-Mikazuchi, Kintoki-Douji, Sukuna-Hikona, Artemisia, Caesar, Pallas Athena, Ariadne and Magatsu-Izanagi as one of the Persona 4 Arena Personas featured in BlazBlue: Cross Tag Battle, as a continuation to Ultimax, Thanatos is still serving as Elizabeth's Persona. Like in P4A, Thanatos is able to use all the Elemental Spells.

Thanatos as it appears in Card Summoner

The protagonist and Thanatos

Thanatos as he appears in Persona 3 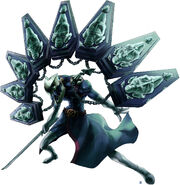 Thanatos as he appears in Persona 3 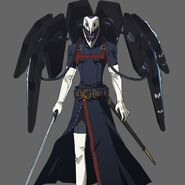 Concept artwork of Thanatos in Persona 3 The Movie

Thanatos in Persona 3 The Movie 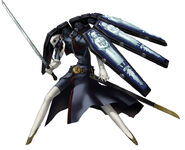 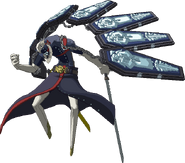 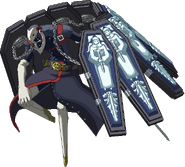 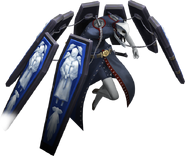 Thanatos as he appears in Persona Q: Shadow of the Labyrinth 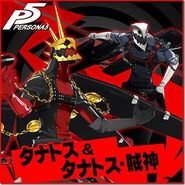 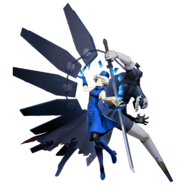 Thanatos as he appears in BlazBlue: Cross Tag Battle
Community content is available under CC-BY-SA unless otherwise noted.
Advertisement