Ryusei Nakao
Tatsuzou Sudou is an antagonist from Persona 2: Eternal Punishment. He is Tatsuya Sudou's father and the leader of the New World Order.

Despite Tatsuzou Sudou and his son Tatsuya Sudou being enemies with each other, their personalities are very similar. He is an amoral, greedy and corrupt politician who will do anything to achieve his own version of an utopia. He has no qualms sacrificing others to achieve his goals, including his minions such as Yung Pao which are killed ruthlessly after they are of no more use. However, in reality his delusions had caused him to be unaware of the greater scheme, causing his very own betrayal by his master.

"The current Foreign Minister who is also the top executive of the New World Order. He is the one behind this plan."
—Persona 2: Eternal Punishment introduction

Father of Tatsuya Sudou, a psychotic man who appears in Persona 2. He is estranged from his son, whom he confined to a mental hospital. Tatsuzou is Japan's Foreign Minister, and is secretly the head of a secret conspiracy, the New World Order, to abuse Sumaru's rumors to create a world without original sin. Both Baofu and Katsuya Suou have very legitimate grudges against Tatsuzou; he arranged for the death of the first and framed the second's father for the serial arson caused by his son 10 years ago, and both of their later careers have much to do with their hatred of Tatsuzou and their efforts to bring him down either by illegal means or by the book.

After receiving word of his son's escape of the Sanitarium, Tatsuzou immediately contacted his Taiwanese Mafia allies, and attempted to have him killed. However, they failed because of Tatsuya Sudou's powers; it mattered little to Tatsuzou, since his son was soon slain at Tatsuya Suou's hands. He pretended to be feeble and incapable of walking without his cane; however, beneath the ruse, the cane was actually a swordstick and Tatsuzou was a very competent fighter.

In the end, his master's energy suffused him, and was transformed into a monster slain by Maya Amano and her investigation team. His plans fell into ruin, and the rest of his partners-in-crime were either killed or suffered worse fates. Tatsuzou was unaware of the fact that he, like his son, is being manipulated by Nyarlathotep. 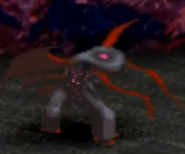 Tatsuzou Sudou as the Detested Hunter