Taraka is a demon in the series.

Tatakā or Taraka was a female Yaksha who could change her form. A curse from her sage killed one of her sons, and the Taraka sought revenge. The sage turned them into man-eating demons, who lived in forests, terrorizing people. She was later slain by Rama.

"Origin: India. An Asura she-demon. She lived in the forest near the intersection of the Ganges and Sarayu Rivers. She terrorized nearby villages before being slain by Rama and Lakshmana."
—Shin Megami Tensei A-Mode DDS dictionary

Taraka kills DB Kuroe, the player's initial mentor and companion, in the tutorial and later returns as a boss in act four and as a regular mob in many of the following acts. She can be contracted in Ueno during the daytime. As an enemy, she appears as a contracted demon to the punks in Ikebukuro, as support for the Kali field boss and among the invading forces during the weekend invasions of Shinagawa.

A demon summoned by the female Ring of Gaea member to prove Flynn's worth in the trial at Tsukiji Hongwanji. As with all the other demons encountered, talking to her will result in her blowing at the candle.

"A female Rakshasa in Hindu myth. Also known as Tataka.
She lived in a forest named after her and would wreak havoc, eating anyone who set foot in her forest. She was eventually killed by Rama."
—Shin Megami Tensei IV Apocalypse compendium

Taraka can be found in the main temple of Tsukiji Konganji. She can teach Nanashi the Tetanus Cut, Dark Sword, Tarukaja and Hades Blast skills through her Demon Whisper. Taraka benefits from learning Physical, Electricity and ailment skills.

Taraka was summoned off-screen to attack the Arcana Strength and Arcana Fortune, but fails. She was obtained after the Hermit Arcana was defeated.

Taraka as she appears in Shin Megami Tensei III: Nocturne

Taraka as she appears in Shin Megami Tensei IMAGINE 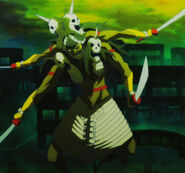 Taraka in Persona 3 The Movie