Tamamo or Tamamo-no-mae is a demon in the series.

Tamamo-no-Mae, or simply Tamano, is a 9-tailed, golden-furred kyūbi-no-kitsune ('nine tailed fox' - a fox that gains spiritual and ghostly powers is a kitsune, and they gain one extra tail for every century they train in their powers) or Senko. She transformed into an unparalleled beauty to gain the heart of Zhou Wang. Her countless atrocities led to the destruction of Yin. When this 9-tailed fox crossed to Japan, she became Tamamo. She is often grouped in the Four Vilest Yōkai of Japan, the other three being Shuten Doji, Nurarihyon, and Sutoku Tenno.

Tamamo first appeared as a young and beautiful woman in the imperial courts of ancient Japan. Her beauty, grace, wisdom, exotic aura, and even her alluring scent instantly turned her into a figure of fame and power amongst the imperial members and government officials. However, she was eventually exposed and accused of being the cause of the emperor's sudden illness by Abe no Yasunari who saw through her disguise, resulting in Tamamo fleeing the court. She was eventually killed in a brutal war by Miuranosuke Yoshizumi, and her body turned into the Sessho-seki (lit. Killing Stone), which was cursed by Tamamo herself so that all life within a certain radius from it would be cursed to death.

"Origin: China. A 9-tailed, golden-furred Tenko. She transformed into an unparalleled beauty to gain the heart of Zhou Wang. However, her countless atrocities led to the destruction of Yin. When this 9-tailed fox crossed to Japan, she became Tamamo. She found her way to Imperial Court, but Abe no Yasunari saw through her guise. She was shot and killed by Miuranosuke Yoshizumi and turned into the Sessho-seki."
—Shin Megami Tensei A-Mode DDS Dictionary 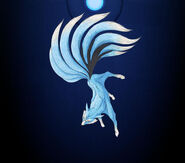 Tamamo no Mae as it appears in Shin Megami Tensei

Tamamo as it appears in Last Bible II

Tamamo as it appears in Last Bible Special
Community content is available under CC-BY-SA unless otherwise noted.
Advertisement