A
Tamaki Uchida is the name given to the female protagonist of Shin Megami Tensei: if....

In Shin Megami Tensei: if... the protagonists wear their Karukozaka High School uniform and are equipped with their COMPs.

In Shin Megami Tensei: if..., Tamaki and her male counterpart act as silent protagonists, as such their personality is based upon the player's actions and decisions.

The protagonist is a student of Karukozaka High School whose gender can be selected by the player. They can choose to go with Yumi Shirakawa to rescue the school and its students, Reiko Akanezawa to find out the truth about Hazama and help save the school, Shinji "Charlie" Kuroi to save themselves and escape while leaving the school behind or Akira Miyamoto to get revenge on Hazama.

Once all four routes of the game have been completed, a special cutscene will play where the protagonist is approached by Stephen. Stephen commends the protagonist's skill in using the Demon Summoning Program to solve the incident and says that he has something to ask of them.

In this sequel to the manga adaptation of if..., the male protagonist is called Nobu. Following the events of the manga, he has transferred to a new school, but has attracted attention from Thorman and Gotou for his connection to the incident in Karukozaka High School and the Demon Summoning Program he carries. He is framed for the death of his mother and forced to go on the run, reuniting once again with Yumi Shirakawa and the now-human Pixie. After Tokyo is flooded, he is taken to the future where he confronts the reincarnation of Hazama.

"A transfer student who joined the Fencing Club. She's always arguing with Tadashi."
—Her introduction, Persona

Tamaki seems to have transferred to St. Hermelin after the surreal events back in her old school, as she will dodge any questions related to it. While she is unable to fight back due to no longer having a COMP, Tamaki still retains a vast knowledge of demon behavior. She is a member of the school's fencing club and frequently quarrels with fellow club member Tadashi Satomi. If the protagonist visits Tamaki after Mikage-cho has been invaded by demons and before the point where the game's story splits into the SEBEC Route and the Snow Queen Quest, Tamaki will give the protagonist the rapier that she used during the Karukozaka incident in if... and wish him good luck.

While Tamaki has no role in the SEBEC Route, she has a minor one in the Snow Queen Quest as one of the victims of Hypnos Tower. In it, she and Tadashi are trapped in a dream together where it's revealed that they are both in love with each other but fought constantly because neither wanted to admit their feelings for one another. After being woken up, Tamaki finds a shard of the Demon Mirror in her pocket, which she gives to the party. Afterwards, she and Tadashi can be found at the entrance to Hypnos Tower.

"A part-timer worker at the agency. She attends a women's college and is an active Devil Summoner. She is dating Tadashi for some reason."
—Her introduction, Persona 2: Innocent Sin

Tamaki is now a college student who works part-time in the Kuzunoha Detective Agency under Daisuke Todoroki as an apprentice detective and Devil Summoner. She helps the party by handling the mail-in magazine prizes for them. When the Sky Museum is under attack by King Leo, she and Tadashi dress up as cat burglars to help rescue the children who are trapped inside. Tamaki tries to fight King Leo directly, but he proves himself to be too powerful for her and easily dispatches her minions.

"While going to college, she works as a Devil Summoner."
—Her introduction, Persona 2: Eternal Punishment

On the Other Side, Tamaki still works at the Kuzunoha Detective Agency. She is also hiding a money-loving demon friend in the bathroom who uses the giant fortune cat in the office as a facade to ask random people for handouts. Tamaki reprises her role of handling the mail-in magazine contest entries for the party. Off-hand, she expresses concern for Tadashi, now her fiance, who has been missing because of assassination threats from sources unknown.

The protagonist's stats are determined by the answers given to Nova at the beginning of the game. Each answer corresponds to a number of points, and the total determines the stats spread.

The Luck Stats has more base points than the other three (28, rather than 24) and the player will also start the game with 5,000 Macca instead of zero.

The questions and the number of points given are listed below. 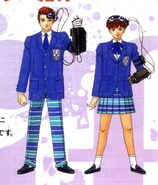 The protagonist with Yumi and Hazama 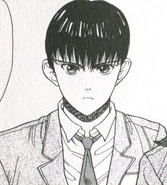 The protagonist in the Shin Megami Tensei: if... manga

The protagonist fighting in if... novel

The protagonist summoning Kerberos in if... novel

Protagonist, Yumi and Shinji in if... novel 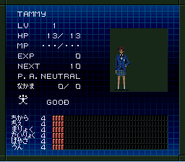 Screenshot of Tamaki with her default Balance Stats 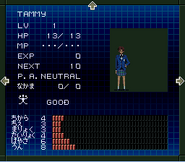 Screenshot of Tamaki with her default Luck Stats 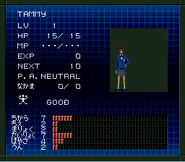 Screenshot of Tamaki with her default Power Stats 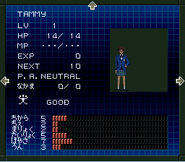 Screenshot of Tamaki with her default Speed Stats