Tam Lin is a demon in the series.

Tam Lin is a famous fairy who was said to haunt Caterhaugh Wood in England. He supposedly lured young women away to ruin them. He was once a human who had been trapped by the Fairy Queen. A young woman named Janet is said to have fallen in love with him at one point, and finally managed to free him.

"Origin: Ireland. He guards the forest of Carterhaugh. Originally, he was a human kidnapped by the fairy queen. He was wounded while hunting in the forest, allowing the fairy queen to capture him. From there, he was meant to become a sacrifice seven years later. But through Janet's efforts and Tam Lin's strong will, he safely returned to his world."
—Shin Megami Tensei A-Mode DDS Dictionary

Tam Lin is encountered early on in the final dungeon, where his respective palette swap (with a complimentary skillset), Cu Chulainn, is also frequently encountered.

Tam Lin was released during the 2014 White Day event as a summon PG and later as a regular double fusion.

Tam Lin can be summoned through a special fusion of Pixie, Spriggan and Centaur. He can teach Flynn the Hama, Gram Slice and Maragi skills through his Demon Whisper. Tam Lin is needed in order to fuse Frost Ace through special fusion.

"A faerie knight from Scotland. As a member of the Seelie Court, he is charged with protecting Carterhaugh. He was originally a child from the area, but after his kidnapping by the faeries at age nine, he took up their ways."
—Shin Megami Tensei IV Apocalypse compendium

Tam Lin appears in the Fairy Forest, in the southern sections of the forest except for the initial entrance area. He can pass the Hama, Gram Slice, Estoma, and Heat Wave skills on to Nanashi through his Demon Whisper. Tam Lin receives bonuses to Physical, Gun, and Light skills passed on through fusion.

"A Scottish fairy knight who protected the glen that was called Carterhaugh. He was once human, but was captured by the Queen of the Fairies and lived as one of them thereafter."
—Persona 3 Portable compendium

While Tam Lin does not appear in Persona 3 or FES, he appears as a new persona of the Lovers Arcana in Portable. He starts out at level 13, and can be gained through Shuffle Time draws.

Tam Lin is a Persona of the Sun Arcana in Persona 4 and remains the only palette-swapped Persona remaining in the game. His fusion prerequisite requires the protagonist to perform a cross-spread fusion using, Gdon, Phoenix, Narasimha and Yatagarasu in the Velvet Room.

In Persona 4 The Animation, Tam Lin represents the bond between Yu and Ayane Matsunaga. He was summoned during the battle against Kunino-sagiri in Heaven to rescue Nanako, although Yu was under the possession of Kunino-sagiri. He unleashed a powerful Ziodyne attack that dealt serious damage to Jiraiya and Yosuke.

"A fae knight of the Seelie Court, said to protect the forest of Carterhaugh. After being kidnapped by the faeries at the tender age of 9, he lived much of his life among them."
—Persona 5 Royal background

Shadow Arihara takes the form of Tam Lin during his boss fight. He can use "Womanizing" to brainwash Ann Takamaki, Makoto Niijima, Haru Okumura and Yoshizawa. He also resists Ann, Makoto and Haru's main elements, so it is strongly advised to not bring them.

"A young fairy in knight's armor who is dedicated to protecting forests."
—Demonary, DemiKids

Known as Tamlin, he can perform the combo Holy Slash with Karfu and has the power Amazon Charm.

"A faerie knight from Scotland. As a member of the Seelie Court, he is charged with protecting Caterhaugh.
Originally a child from the area, after being kidnapped by the faeries at age nine, he took up their ways."
—Devil Survivor 2 compendium

Tam Lin first appears as a formidable foe during Joe's contract battle, easily being the biggest obstacle then.

"A fairy knight from Scotland. As a member of the Seelie Court, his duty is to guard the forest of Carterhaugh. When he was still a human boy, he was kidnapped by the fairy queen after fainting from an unfortunate horse riding accident. He soon learned to adopt their ways."
—Shin Megami Tensei: Liberation Dx2 Demonic Compendium 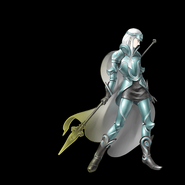 Tam Lin as he appears in Persona 4

Tam Lin as he appears in Last Bible II

Tam Lin as he appears in Last Bible III

Tam Lin as he appears in Last Bible Special

Tam Lin as he appears in in Devil Survivor 2

Tam Lin as he appears in Persona 4 The Animation 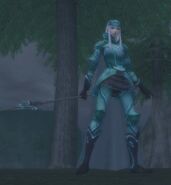 Tam Lin as he appears in Shin Megami Tensei IMAGINE 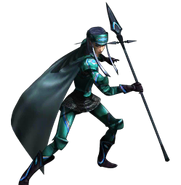 Tam Lin as he appears in Persona Q: Shadow of the Labyrinth

Tam Lin as he appears in Persona 5 Royal