Talos is a demon in the series.

Talos, in Greek myth, is an automaton forged of bronze, who protected the island of Crete from trespassers. Despite his strength, he had a vein which was shut together by a nail. When Jason and the Argonauts drew near Crete's shores, Talos attempted to stop them by throwing giant boulders. However, he was slain when he was hypnotized by Medea and had the nail removed afterwards.

"A metal demon created by a wizard to guard and protect his vault of mystic treasures."
—Demonary, DemiKids 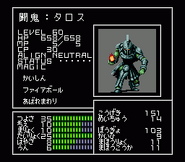 Talos from the Sega CD remake of Shin Megami Tensei
Community content is available under CC-BY-SA unless otherwise noted.
Advertisement