Alright, I'm not 100% on some of this data. There are a few demons that are questionable, such as Bigfoot being a machine. I'm also not totally sure on Asura and a couple others. So if you see something that you think sounds wrong, and you find other information that conflicts with this, don't be afraid to fix it up. In addition, I only know a couple of the English terms for the clans, so if you know one, put it in like I did with Mashin and Tensei, so both are avaliable for players to find the demon they're looking for. SeventhEvening 21:15, 6 July 2008 (UTC)

Those are very cool! Can you find all the Kyuuyaku Megami Tensei sprites in one place too? GalaxiaWild (talk) 10:31, September 11, 2014 (UTC)

Found these off nico. What's are those? I don't understand japanese. 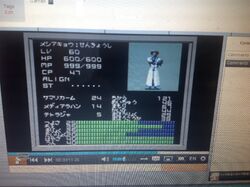 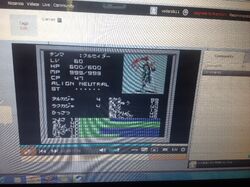 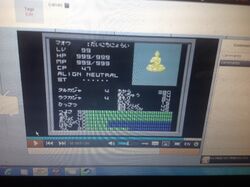 First one is Messian Missionary. It knows Samarecarm, Mediarahan and Tetraja. Second one is a Gaian, but the name is too blurry for me to read. It knows Sexy Dance, Megido and Recarmdra. Third one is Tenma Crusader. It knows Tarukaja, Rakukaja and the third skill is Hissatsu, which translates to Certain Kill or something like that (dunno the official translation or what it does). The last one is Tyrant Dainichinyorai, which is another name for Virochana. It also knows Tarukaja, Rakukaja and Hissatsu. G.A.S.A (talk) 00:22, September 11, 2014 (UTC)

the second one is Amaterasu. i wish the pictures were at least straight on, none of those are suitable to use for the sprite images. they're all good enough to get the stats from though (just barely in amaterasu's case). Tathra (talk) 00:31, September 11, 2014 (UTC)

If Virochana is a Tyrant, how come its alignment is clearly listed as Neutral? Same with Amaterasu being listed as Chaos, and the "Tenma" Crusader being listed as Neutral. Also, the alignment for the "Messian Missionary" doesn't seem to display at all. Also, are you sure second one is Amaterasu? I think it looks more like Jorougumo (whose artwork on this site has got to be from Shin Megami Tensei), though without the spider demon next to her. I'm not any authority on this, I'm just confused. GalaxiaWild (talk) 10:25, September 11, 2014 (UTC)

According to this site, then yes. According to it, Virochana says "I'm Tenma Virochana" when fused, but its status screen says "Tyrant". Also, it is the only Neutral-aligned Tyrant. Also, to create it you must visit the Fusion Master (the guy who fuses the Angel Ring in the Law Route) and fuse Crusader, Amaterasu and Missionary. Missionary is the strongest Messian but does not generate random demons when fused. Amaterasu really is Amaterasu, and the site points out how it uses the same sprite as Jorougumo. As for why Missionary's Alignment doesn't appear... I dunno. G.A.S.A (talk) 13:07, September 11, 2014 (UTC)

alignment is based on race, so there shouldnt be any discrepancies between race and alignment; i'm thinking Virochana's race is clearly an error since he's always Deity Race and Sun Arcana in later games, and it says "Tenma" in one place, "Tyrant" in another, and has the wrong alignment for both. errors and bugs do happen, but we can't just make guesses without any supporting evidence. if virochana is a special fusion then we can't even use fusion requirements to determine its race if it is an error. Tathra (talk) 14:46, September 11, 2014 (UTC)

The cross in those cases refers to demons who weren't recruitable in the SNES version. Asura, Astaroth, etc, were boss only.--Otherarrow (talk) 17:17, September 28, 2014 (UTC)

Retrieved from "https://megamitensei.fandom.com/wiki/Talk:List_of_Shin_Megami_Tensei_Demons?oldid=201660"
Community content is available under CC-BY-SA unless otherwise noted.