I have a few guesses on Goro's Persona.

I think its more likely the following possible guesses I thought about, since he is a detective and it would relate to him being an enemy of Arsene or the writer that created Goro that could be the name of his persona though:

I get this vague feeling he might be a traitor.

I may have misheard (my Japanese isn't the greatest), but in  the 18 minute gameplay footage, when Joker gets caught by the swat guys, I heard the words "Nakama" and "Uraretanda* (not sure of the spelling)" , which (I think) means friend & some form of betrayal respectivley.

He is a detective, but there's no guarantee he'll be like Naoto and just be the "won't tell the police what's going on" kind of guy.

Also, strangely, this guy doesn't show up in the intro (I know he's in the scene where they're all walking towards the Casino, but stil).

I'm not 100% sure that Goro's tie belongs to Kosei, since Hifumi has the similar looking tie that Goro has. If it is true that Goro attends the same school that Yusuke attends too, it could be a modified version of his school uniform that Goro is wearing. On his blazer, his arm hides the school's emblem which it could support of Goro attending Kosei probably in the same year that Yusuke is attending or in the same year that P5MC or other playable characters are attending. So far this is just a grain of salt I'm thinking about which school Goro is attending until its confirmed in the game or later on in the scans when they reveal more about Goro thouh.

May not be a playable character? Edit

Well he does have dlc stuff, wouldn't it be weird for a character to have alternate costumes if they aren't playable? either way I'm fine if he is or isn't, his whole shtick is kinda meh for me and since his the last character to join and joins pretty late too his characterization might suffer a bit and just become another exposition fairy.

Since people are vandalizing the page, maybe there should be a block until more information is uncovered? Charmed-Jay (talk) 17:58, September 18, 2016 (UTC)

Partial protection is placed - only registered users may edit for the time being. Whenever there is information that may be disputed, sources would need to be provided by the party making or supporting the claim, as always the practice. BLUER一番 18:23, September 18, 2016 (UTC)

Shadow Goro and Shido being connectedEdit

Goro's shadow was born from the amount of neglect that Shido as a father caused Goro from his entire life, was the reason he became a detective to gain the respect he wanted and being used by Shido himself. And later on join the Phantom Thieves of Hearts to take down his father which resulted in his social link being maxed.

On a side note, Goro is similar to Adachi being the whole detective being used by the higher ups --Your Arugment Is Invalid (talk) 14:07, September 19, 2016 (UTC)

From the gameplay footage that was seen about Goro, possible one of his weapon could be a Nambu Model 60 a standard revolver in Japane since he is a detective, which he could have already have a license to carry one being a detected and all for a range weapon in combat to which was seen in the footage of him aiming the gun towards P5 MC. Even though his melee weapon is not confirmed in the game footage that was seen though ----Your Arugment Is Invalid (talk) 04:22, September 26, 2016 (UTC)

Can someone add this to Goro's Profile? Cause I can't edit his page. Thanks.

Sex: Male
Height: 178cm
Weight: 64kg
School year: 3rd year high school student
Star sign: Gemini
Blood type: AB
Codename: Crow
Arcana: Justice
Initial Persona: Robin Hood
Family: None (lives alone in Metropolitan Apartment Mansion)
Skill: Reasoning
Habit: Getting lost in thought during conversation
Hobbies: Bicycling (uses a hybrid bicycle for easy turning in Tokyo), bouldering, fashionable games like darts
Favorite food: Nothing in particular.
Regarding food, using it as a topic is more important to him, so he always makes sure to try out the latest popular dishes. Waiting in long lines isn’t painful for him. He also uses his cycling hobby to ride around town, gathering stories to use in conversation with adults. Since he spends a lot of time with adults, he has a reputation amongst Tokyo’s famous hidden stores and high class restaurants, although in truth he has little interest in the food’s flavor.

I have been able to edit all of the other P5 characters pages freely, but I am blocked from editing Goro's page? Anyone else having this problem? I have photos to add to the gallery and one photo needs to be changed. TLGR2014 (talk) 22:18, January 26, 2017 (UTC)

Anyone else think his black mask has some slight similarities with Guts' Berserk Armor's Helmet, with maybe a slight nod to this being that he actually makes people go berserk, including himself? Shadow12000 (talk) 10:07, May 13, 2017 (UTC)

When playing as him, Goro's Persona Robin Hood is weak to Curse skills (because it's supposed to be a Bless-elemental Persona), but in the first phase of his fight that weakness is gone. 37.182.55.23 05:16, September 27, 2017 (UTC)Vittorio Pugliese

The article mentions that in Royal, Akechi is hesitant to investigate the Phantom Thieves but is forced by Sae. When did this happen? I couldn't find the video, only the part when Sae accuses Akechi of taking her files after Okumura's death like in the original game. --Frost190 (talk) 06:40, November 22, 2019 (UTC)

Does anyone know where this image comes from? 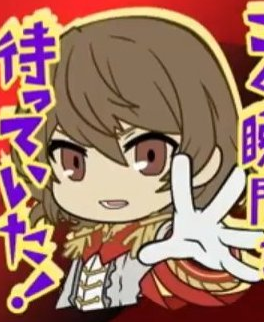 It's official and from a collaboration, but I cannot remember which one its from and Google has been no help. --Gravimetric Warp Drive (talk) 15:35, April 5, 2020 (UTC)

Retrieved from "https://megamitensei.fandom.com/wiki/Talk:Goro_Akechi?oldid=352265"
Community content is available under CC-BY-SA unless otherwise noted.