In Buddhist mythology, Takeji Zaiten (他化自在天) or Takejizaitenjin (他化自在天神) is the alternative name of Dairokutenmaou. The name comes straight from the highest realm of the "Six Lust Realms", or known as Kamaloka, where the demon lord resides in. Its name means "having pleasure from watching over other living things change". One day-night cycle in this realm is 1600 years of the mundane world, while the Maou lives in this realm for 16000 years and then reincarnates.

Kanji Tatsumi's new Ultimate Persona after the player has maxed out his Social Link, and talked to him after 1/10. 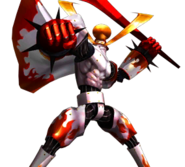 Takeji Zaiten in Persona Q
Add a photo to this gallery
Retrieved from "https://megamitensei.fandom.com/wiki/Takeji_Zaiten?oldid=387069"
Community content is available under CC-BY-SA unless otherwise noted.