Naoki Imamura (Drama CD)
Takeda is a minor character appearing in the Persona series. He was renamed Tiny in the original release of Revelations: Persona, but his name was reverted to Takeda for the PSP re-release.

Takeda acts as Takahisa Kandori's head of security at the SEBEC building and the first boss battle of the game. He is regarded as incompetent by his employer due to repeated breaches of security by St. Hermelin students. He is also capable of summoning a Persona, although its name is unknown.

During the fight against him will be accompanied by four Agents as the battle starts. Takeda himself will use the Delyte skill to try and blind the party. Despite his efforts, he is defeated by the party who chase after Kandori. However, his fate after his defeat is unknown.

As Kei Nanjo and Masao Inaba (alongside Hidehiko Uesugi) make their way through SEBEC forces with their Personas (sans Brown who didn't awaken his yet), Takeda arrives to help stop them. Due to Mark and Nanjo exhausting themselves by overusing their Personas, he's able to capture them and orders his agents to take them inside.

His next appearance mirrors his game counterpart as the students (who rescued their captured friends) confront him and Kandori in the latter's office. Kandori berates him for his incompetence, for which he apologizes to his employer. After Kandori attacks the students with his Persona (which causes a serious injury to Brown), Takeda is ordered to finish them off. Summoning his own Persona, he attacks them but is taken off guard by Brown awakening to his Persona, Nemhain. Nemhain knocks down the security chief, but doesn't knock him out. However, before he could retaliate, Maki Sonomura and Eriko Kirishima use their Personas to encase him in ice (with his nose being left unfrozen so he could breathe) thus defeating him. 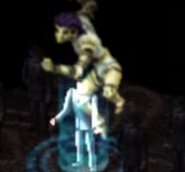 Takeda with his Persona in the manga 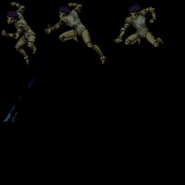