Take-Mikazuchi is a demon in the series.

Takemikazuchi, also known as Kashima-no-kami, is a Shinto god of thunder that was born from the blood on the sword of Izanagi when he slew the newborn fire god, Kagutsuchi.

When Amatsu decided to increase their influence on the earth, they asked that Takemikazuchi, along with his brother, Futsunushi, descend from the High Plain of Heaven in order to pacify the deities of Izumo. The last of these, O-Kuni-Nushi, was compelled to surrender, but his son, Takeminakata, would hear nothing of it.

Twirling a boulder on his fingertips to frighten his foe, he challenged Takemikazuchi to a test of strength. They had the first sumo match, in which Takemikazuchi won by crushing the arms of Takeminakata "like a young reed," casting them aside. Takeminakata fled to Lake Suwa, where he married the Suwa goddess Yasakatome and became the guardian god.

"Origin: Japan. A Japanese god of thunder. He was born when Izanagi chopped off Kagutsuchi's head. To conquer Ashihara no Nakatsukuni, Amaterasu sent him on the Ame-no-Torifune. On arriving at Izumo, he demanded Ookuninushi hand over the land to the gods. Take-Mikazuchi had to persuade Kotoshironusi and defeat Take-Minakata first. But eventually, Ookuninushi handed over the Ashihara no Nakatsukuni."
—Shin Megami Tensei A-Mode DDS Dictionary

Take-Mikazuchi is the second demon that can be fused with the Spirit Sword, creating the Raijinken.

"One of the sons of Okuninushi. When Amatsukamis decided to increase their influence on the earth, they sent Takemikazuchi to conquer Takeminakata. They had the first sumo match which Takemikazuchi won. Takeminakata then had his arms been cut and fled to Lake Suwa, where he married the Suwa goddess Yasakatome and became the guardian god."
—Shin Megami Tensei IMAGINE Compendium

Take-Mikazuchi appears as the boss of the Shibuya Metro instance players can access during the Chain of Curse series of acts. His strength at the end varies incredibly and can only be determined beforehand by the amount of HP the miasma consumes over time.

Take-Mikazuchi appears in the New Game Plus Challenge Quest, A Century of Defense. Summoned a hundred years ago during a great war to save Japan, he has resided in Midtown ever since Japan lost the war and was defeated by their enemy and their superior spirits, which gave him a severe injury. The client Tetsu made a promise to Take-Mikazuchi to find someone worthy to fight him. He mentions that the land lacks a summoner after introducing himself and asks Flynn if he is ready to fight.

During the battle he promises not to go easy on Flynn just because he's a human. The creed of warrior gods says to always go all out against any opponent. Impressed by Flynn's skills when defeated and that it's a shame that he's merely a human, he decides to leave and admits it was hard looking for someone stronger than himself. Before leaving he mentions that there were other demons summoned years ago alongside him and wonders if they are still trying to protect the country.

"The Japanese god of war or thunder. He is a god who played an active role in the abdication of Japan.
He was born from the blood spattered on the sword that Izanagi used to behead the fire god Hi-no-kagutsuchi. He was sent to Okuninushi from Takaamagahara at the time of abdication, but since Okuninushi's son, Take-Minakata, didn't obey Take-Mikazuchi, they had a duel of strength, from which he emerged victorious."
—Shin Megami Tensei IV Apocalypse compendium

Take-Mikazuchi appears in the quest "u have a guest!!!" where he will ask that Nanashi bring Yamata-no-Orochi to him in the Fairy Forest. Upon being presented with Orochi, he will have Nanashi assist in killing Orochi. The Ame-no-habakiri will break and its shards will be absorbed into the Ame-no-murakumo, a stronger sword with the same abilities as the Ame-no-habakiri. Completing the quest will unlock Take-Mikazuchi in special fusion and grant Nanashi the Compendium Ticket, which can be used to summon one demon from the compendium for free.

Take-Mikazuchi's special fusion requires the demons Okuninushi, Raiju and Momunofu, along with Nanashi being able to control level 55 demons. He can teach Nanashi the Ziodyne and Berserker God skills through his Demon Whisper. Take-Mikazuchi benefits from learning Electricity and Physical skills.

"The Japanese god of thunder. He carries the divine sword Totsuka-no-Tsurugi and is said to be the founder of ancient sumo wrestling."
—Persona 3 compendium

Take-Mikazuchi is Kanji Tatsumi's initial Persona. It differs from the regular incarnations and resembles a large black robot with skeletal designs. It holds a lightning bolt which it uses to cast Zio magic by shattering or as a typical sword.

After completing a song, Take-Mikazuchi can be summoned to play the drums.

"A warlord of some renown that can turn his hands into some very lethal weapons."
—Demonary, DemiKids

Known as Warbolt, he has the Power Deadeye, which decreases the chance of missing. Warbolts generally appear as Trainers throughout the game, strengthening the demon allies of the DemiKids over time after being paid.

Take-Mikazuchi retains the same role that he had in Light/Dark as Trainers. He is one of the demons given as a prize for beating Eligor's quiz in Ice Book.

Take-Mikazuchi is the main demon used by Gin. While he is rarely seen due to Gin's lack of participation in battles, Gin speaks of him in his emails and uses him in his battle with Azuma on the 6th Day. Completing Gin's battle during that day will unlock Take-Mikazuchi for fusion.

On the new eighth day of Yuzu's route, through a specific series of events, the party will learn that in order to repair the barrier protecting Tokyo from the demons, they must replace Jikokuten of the four Devas, who was defeated by Jezebel with Amane. The party may then find Gin and explain the situation, asking for Take-Mikazuchi to replace Jikokuten; Take-Mikazuchi accepts and the party must then undergo a mission protecting Gin while he commences a ritual with Jikokuten's artifact sword.

"The Japanese god of war or thunder. He is a god who played an active role in the abdication of Japan.
He was born from the blood that spattered on the sword that Izanagi used to behead the fire god Hi-no-kagutsuchi. He was sent to Okuninushi from Takamagahara at the same time of abdication, but since Okuninushi's son Take-Minakata didn't obey Take-Mikazuchi, they had a duel of strength, from which he emerged victorious."
—Devil Survivor 2 Compendium

Mikazuchi as he appears in Shin Megami Tensei III: Nocturne.

Take-Mikazuchi as it appears in Card Summoner

Take-Mikazuchi as he appears in Devil Survivor

Take-Mikazuchi as he appears in the Megami Ibunroku Persona manga 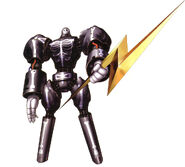 Take-Mikazuchi as he appears in Persona 4

Take-Mikazuchi in Persona 4 The Animation

Take-Mikazuchi in the Persona 4 manga

Concept of Take-Mikazuchi in the Persona 4 The Animation 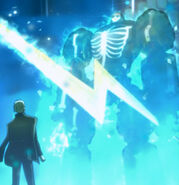 Take-Mikazuchi appears in Persona 4 The Animation 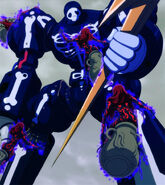 Take-Mikazuchi in Persona 4 The Golden Animation

Take-Mikazuchi as it appears in the Persona 4 Arena manga

Take-Mikazuchi seen playing the drums of Persona 4: Dancing All Night 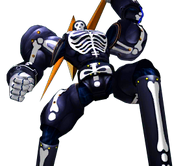 Take-Mikazuchi in Persona Q: Shadow of the Labyrinth 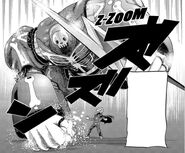 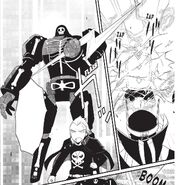