Grant George (PSP)
"A pure body houses a pure mind, and a pure mind houses a pure Persona! You're ten years too early to face me! As long as I'm still standing, I won't let you lay a hand on my wonderful students! Go back to your boss and tell him I said so!"
—Takashi Hanya, Persona 2: Innocent Sin

"Known as "Hann'ya" among the students, who despise his extreme strictness."
—PSP introduction

Even as the Vice-Principal of St. Hermelin High School, Hanya rarely cares for the students there. He is called "Hann'ya" as a result, aptly named from the mask of a demon in Japanese folklore theater. In the English release of Revelations, he was mocked as "Darth Harding" which is a play on his localized name. His mean-spirited bullying of Kenta Yokouchi heavily influences the violent awakening of Kenta's Persona, Mara.

"The new principal, transferred from St. Hermelin High. There, he was hated, but at Seven Sisters he's looked up to."
—His introduction, Persona 2: Innocent Sin

After the events of St. Hermelin High School, Takashi Hanya was transferred to the Seven Sisters High School and became a principal there. Despite him retaining his harsh and strict personality, all of the students and staff love and obey him unquestioningly. When Tatsuya Suou and his party confront him in the school's clock tower, it is revealed that this was the effect of a deal he made with Joker which is also the cause for his regained hair. With no resolution in sight, Hanya attacks the party to defend the giant emblem in the stained glass of the tower.

He wields a giant double open end wrench in battle along with a water-based Persona, Hannya, which fits with his own name as it wielded shields which when together looked like a Hann'ya mask. Upon his defeat at the Seven Sisters High clock tower, the stained glass got loose from its bearings and shattered in the floor below. Hanya, desperate, chose suicide rather than face the consequences of his deal with Joker.

Hanya's fate afterwards will be determined by the party's future actions. After Hanya jumps out the window, Tatsuya can talk to a student who asks if Principal Hanya is still alive. If confirmed as such, Hanya's statue at Seventh HS will disappear later in the game. Hanya will eventually emerge during the invasion of Hitler's Last Battalion in full battle gear. He will single handedly repel the invasion and in turn will earn the respect and admiration of the Seventh HS student body. But if his death is confirmed, the St. Hermelin alumni will be the ones fighting the Last Battalion instead.

In Hanya's death scenario, he does not die instantly upon falling on the ground. Instead, he runs to Honmaru Park but suddenly collapses. Witnesses mention that he lost his breath when taken by an ambulance. Upon learning the terrible power of rumors, the party is shocked, and wonder if rumors can bring the dead back to life.

As with the other casualties incurred in the events that led to Nyarlathotep's successful plan, he was resurrected and placed with no memory of the events in the alternate reality created to save Maya Amano.

"The new principal from St. Hermelin High. There, he was hated and known as "Hardy". Here, he is also hated."
—His introduction, Persona 2: Eternal Punishment

Principal Hanya appears briefly, scolding Anna Yoshizaka in the school grounds before being found dead in his office, brutally murdered by JOKER. The party later learns the one who calls JOKER for murder is Noriko Katayama instead of Anna.

"Tough love must be applied to delinquent students. I'll teach you the dignity and authority of a proper principal!"
—Takashi Hanya before his boss battle, Persona 2: Innocent Sin 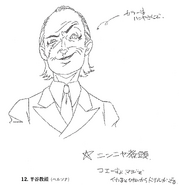 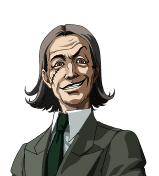 Hannya as he appears in Persona 2: Innocent Sin and Eternal Punishment