Jūrōta Kosugi
Takahisa Kandori is the main antagonist of Megami Ibunroku Persona. He is known in Revelations: Persona as Guido Sardenia.

"The ambitious branch president of SEBEC. Sinister rumors circulate about him..."
—PSP introduction

Takahisa Kandori is a former graduate and student council president of St. Hermelin High School and in the present the head of the Mikage-cho branch of SEBEC, which is used as a front to further development of the DEVA System. Using the reality-altering system, Kandori enters Maki Sonomura's mind, allowing him to make contact with her malevolent Id, Aki, through which he is able to gain control over half of Mikage-cho. While ultimately successful in becoming a demigod, Kandori becomes nihilistic in his outlook, losing his interest in the power he had accrued, and is on the verge of giving himself up to the group of St. Hermelin students who had fought their way to him when Kei Nanjo pelted him with insults and taunts, prompting him to prepare his Persona Nyarlathotep and enter his final battle.

In the confrontation with him, he asks only one thing of the party: kill him so he can experience death. In the end, Nyarlathotep possesses his body, forcing him to transform into a stronger form, called "God Kandori", before finally allowing him to die at the party's hands.

"A Persona user that once attempted to destroy the world. He was defeated by Nanjo and Elly and allegedly died four years ago..."
—Persona 2: Eternal Punishment introduction

During the events of Persona 2: Eternal Punishment, Takahisa Kandori (now called Guido Kandori in the NA version, which also retcons "Guido Sardenia" as nothing but an alias) is brought back to life through the power of Kotodama performed by the New World Order and poses as Guy Shinjo (Hisataka Shinjo, 神条 久鷹 in the Japanese version), the secretary to Tatsuzou Sudou. During the course of the game it is revealed that Nyarlathotep summoned him via rumors to develop the Joker Separation Machine that literally extracts Kegare from humans.

He is fought in the Undersea Ruins alongside Chizuru Ishigami, who is implied to have developed feelings for him, which he at least partly reciprocates. If the player has chosen Nanjo's route, he will be fought against along with four X-2 robots. He suggests that he is Nanjo's "Shadow" while Nanjo assumes the "Light" role. When defeated, he encourages Tatsuya Suou to conquer the Shadow (Nyarlathotep) which has been toying with his fate but refuses to flee the collapsing ruin and stays with Chizuru to die despite the pleas of his old adversaries. He expresses some regret for his chosen path, but he admits he also believes he's too old to change. After his second death, Maki expresses regret that she wasn't able to speak to him again and later his half brother Reiji Kido, who wanted to kill him in the first game, shows signs of forgiveness and combines both brothers' name for Reiji's unborn child.

Kandori is a boss in the second part of Tatsuya's scenario, appearing before Tatsuya as he goes through the NWO base to find Shiori and free the other captured people. Before and after the battle he speaks of Tatsuya and Maya's role, the contradictions of creation, and how both himself and Tatsuya have been manipulated and exceeded the roles given to them by Nyarlathotep.

If the player chooses Nanjo's route, Kandori along with four X-2 robots will be fought in the Undersea Ruins instead of Chizuru Ishigami. Initially Kandori will remain defending until the X-2 robots are defeated. The robots can be dealt with Lightning Fusion Spells easily. Kandori's unique spell Unperishable Black, which halves all party member's HP, can be negated by spell Tetraja or item Silver Manisha. Since Kandori is strong against all kinds of elemental attacks, instead of inflicting diminished damage directly, it is quicker to repel his attack damage back to himself. Repelled damage ignores defensive attributes of either party unless the damage dealer can nullify the said attack. It is possible to summon two versatile Personas with Lightning spells and Shot-repelling attribute (Strength Umayadono-Ouji and Star Heinir), the rest can be protected by spell Tetrakarn so Kandori will eat up his own Rain of Arrows attack five times in the best case. Kandori's normal attack and X-2's two of three attacks are Shot type as well, making the Shot-repelling resistance alone very valuable in this battle.

Kandori as the Masked Boy in Megami Ibunroku Persona

Kandori as seen in Eternal Punishment 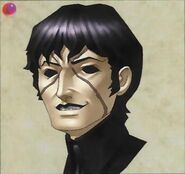 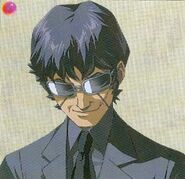 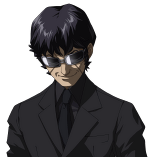 Kandori as he appears in Persona 2: Eternal Punishment (PSP). 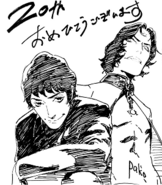