Tajikarao is a demon in the series.

Tajikarao no Kami, or Tajikarao for short, is a kami whose name means "heaven-hand power," and he has a role in the story of Amaterasu hiding in a cave, in which the kami Omoikane proposed a plan to lure Amaterasu out of hiding. In the plan, birds were gathered and made to call out, norito litanies were offered, and the kami Ame-no-Uzume presented an entertaining dance in front of the cave. Out of curiosity, Amaterasu opened the rock door slightly to peer out, only for Tajikarao to grab her hand and pull her out of the cave.

Tajikarao first appeared in the release of Ichigaya's Kagurazaka Zhu Que Caverns gold-level instance and appears in certain rooms there. His accomplished variant is the only demon in-game that naturally learns Buddha's Palm. He plays an integral part in summoning the female Amaterasu to the boss room. In an April Fool's blog entry, the developer joked that due to his popularity, the game's genre would change from MMORPG to MTORPG (More Tajikara Online RPG). 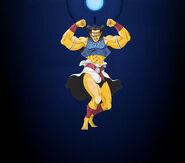