Club music?
Shibuya ("I guess I go there often... I basically live there. I don't go to the east side very much.")

Vegetables ("Life's all about meat, right?")

Kaido has dark pink hair which is spiked back, matching color eyes and sharp features.

Kaido wears a black jogging outfit, with stripes of blue lining the jacket's collar and arms and black shoes. Kaido has a feral look to him.

Kaido, at first, seems to be a good guy that doesn't like to see other people make senseless riots. Ironically, he starts displaying his hot blooded self once he starts getting obsessed with power throughout the game. At the end of most routes, Kaido shows his brutality and total disgust to people weaker than him. He is especially protective of Mari, for whom he harbors a deep crush on that he doesn't like to bring up to others (though he feels a bit embarrassed that Mari was his older brother's crush, and that he is younger than both of them).

The leader of the charismatic "Shibuya Daemons," 19 years old, known as "Kaido." In contrast to his appearance, he has a reputation of being very helpful.

Originally, his older brother was the Daemons' leader, but he was the first victim in what is now known as the "bloodless murders." Shortly after taking over the Daemons, he came across a COMP and swore revenge upon the criminal. This desire, coupled with the loss of a "demon-hunting" bet he made with Yuzu, calls forth Pazuzu, demon king of the wind. Depending on the protagonist's choices, he can either kill Keisuke Takagi in retaliation for the latter's murder of Daemons, or aid his childhood friend and crush, Mari Mochizuki, in her battle against his brother's killer.

During the lockdown, Kaido teams up with Honda most of the time when fighting demons. He can also team up with Midori Komaki and fight the party on the 5th day depending on the protagonist's choices.

Kaido does not show up at all.

He assists the party in making a distraction on the SDF barricades to allow them to escape the lockdown.

In Overclocked, Kaido is later seen being pursued by the SDF with his COMP's energy being depleted. Shortly after the battle, he later joins the party only to say he is repaying a debt. Depending on the protagonist's choices, he will either assist the protagonist in destroying the remaining demons if the protagonist restored the barrier, or aid in defending Tokyo from demon attacks should the barrier remain destroyed.

If the protagonist follows Naoya's path, Kaido will join the party along with Naoya after Yuzu and Midori leave. The same happens if should the protagonist choose Kaido's path.

Kaido is not seen in this ending.

Kaido is seen in the ending of Atsuro's route, seeming despondent that all the demons have disappeared.

Kaido does not show up at all.

The party find Kaido being persecuted by SDF soldiers, his COMP having run out of battery power. If rescued, he will join the party. If he is not rescued, he later appears at the SDF base having been arrested offscreen. Commander Fushimi orders him to aid the heroes, and with some goading from the protagonist, he joins the party.

Kaido generally encourages the Overlord to kill anyone that gets in their way, angel or demon tamer. He will grudgingly agree to hold back if the protagonist decides to not harm humans. If the protagonist agrees with killing humans, however, he will tell Mari to leave the group in order to spare her from being involved in their dirty work.

Kaido is seen defending a barricade from a horde of demon tamers trying to get out at all costs. The party assists him and the SDF in stopping the big wave, but he does not join the team, cheering from the sidelines after seeing their good actions paying off, while he defends the barricades from being taken down.

Kaido is a physical-oriented fighter, boasting incredible Strength and Vitality values that exceed Atsuro's. However, his horrible Magic stats leaves him vulnerable to damage from magic skills, and his low Agility and Speed of 47 often leaves him the last to move. Kaido also has extremely limited availability, making Atsuro a faster and overall more practical choice for a physical demon tamer.

Kaido first appears in battle here teamed up with Honda. They then work with the protagonist's party in defeating the demons in the area.

Here, Kaido and Honda challenge the protagonist's party to see who can defeat more demons in the area. Kaido even comes with a Basilisk and Nalagiri in his team to make defeating the demons much easier for him.

Kaido and Honda are found attacking civilians here and must be defeated.

If the protagonist fails to keep Kaido from hunting Keisuke down, they will have to fight and defeat Kaido after he kills Keisuke. If the protagonist gives Mari's bag to Kaido or fails to get the bag to Mari outright, he instead appears during the fight with Kudlak as an ally with the same stats.

If the protagonist chooses to side with Keisuke rather than confronting him, Midori leaves the group, and later shows up in this battle with Kaido. 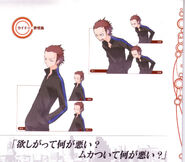 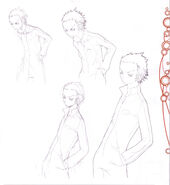 Kaido in the manga adaptation
Community content is available under CC-BY-SA unless otherwise noted.