Suzuka Gongen is a Persona in the series.

Suzuka Gozen (鈴鹿御前, Suzuka Gozen)? is a legendary figure prominent in Japanese folktales of the Kamakura period. Her appearances also differ from one legend to another, some regarded her an ogress, a female bandit and as far as a goddess, and even her physical appearance varies.

Also known as Suzuka Gozen and Tate Eboshi, in "Tamura no Soushi" Suzuka Gongen is a warrior woman who married the king of the oni, Akuro-Ou, but later falls in love with Sakanoue no Tamuramaro, the hero sent to exterminate them. Suzuka then betrays the oni by killing Akuro-Ou's retainers and letting Tamuramaro enter the oni's castle.

Suzuka Gongen is Chie Satonaka's ultimate Persona that can be obtained by maximizing her Social Link. It inherits the stats from her initial Persona, Tomoe, while upgrading its Ice resistance to Null and losing its Fire weakness.

Suzuka Gongen is Chie Satonaka's second-tier Persona that can be obtained by maximizing her Social Link. It inherits the stats from her initial Persona, Tomoe, with a +2 boost to Agility. Suzuka Gongen nullifies Ice skills and resists Light skills, but has a weakness to Fire skills. Talking to Chie after January 10th will transform Suzuka Gongen into Haraedo-no-Okami. 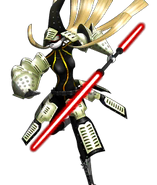 Suzuka Gongen in Persona Q: Shadow of the Labyrinth
Community content is available under CC-BY-SA unless otherwise noted.
Advertisement