Suzaku is a demon in the series.

The Zhu Que, also known as Vermilion Bird of the South or simply the Vermilion Bird, is one of the Four Symbols of the Chinese constellations (Si Xiang) along with Bai Hu, Xuan Wu and Qing Long. According to Wu Xing, the Taoist five-elemental system, it represents the fire element, the direction south and the season summer correspondingly. It is also known as Suzaku in Japan and Jujak in Korea. Suzaku is an elegant and noble bird in both appearance and behavior, it is very selective in what it eats and where it perches, with its feathers in many different hues of Vermilion.

It is occasionally confused with Feng Huang, although this confusion does make some sense when one is aware that non-Han variations of the Four Symbols consider the Feng Huang and the Zhu Que as the same creature.

Known as Feng Huang, it is obtainable when the Demi-fiend is level 36 or higher. It has the ability to drain Electricity Skills and null Expel Skills. However, it is vulnerable to Ice Skills. It also has the spell Liftoma, allowing the Demi-fiend to walk above damaging ground without any effects.

In Shin Megami Tensei III Nocturne HD Remaster its name has been changed to Zhuque.

"The Vermilion Bird is one of the Four Symbols of the Chinese constellations. According to Wu Xing, the Taoist five-elemental system, it represents the fire-element, the direction south, and the season summer correspondingly. Thus it is sometimes called the Vermilion Bird of the South and it is also known as Suzaku in Japan and Jujak in Korea."
—Shin Megami Tensei IMAGINE compendium

This demon was called Suzaku on the Japanese server and Zhu Que on the international server. It appeared as a notoriously rare boss in Kagurazaka Zhu Que Caverns' bronze instance. The game had been updated to increase the rate of his appearance two times since his implementation.

Players having met him had a chance to acquire the ability to fuse him. If a player had looted one of its wings, it was possible to watch the boss cutscenes for him at any time by speaking with the Will O' Wisp NPC in the dungeon's lobby.

"One of the Four Holy Beasts of Chinese lore.
It represents the south, summer, and fire. It is a giant bird that resembles a quail and is said to chirp in five beautiful voices."
—Shin Megami Tensei: Strange Journey compendium

"One of the Four Holy Beasts of Chinese lore.
It represents the south, summer, and fire. It is a giant bird that resembles a quail and is said to chirp in five beautiful voices."
—Shin Megami Tensei IV Apocalypse compendium

Feng Huang can teach Nanashi the Agidyne, Dekunda and Bind Voice skills through its Demon Whisper. It benefits from learning fire, ailment and support skills.

"One of the Ssu-Ling, celestial creatures in Chinese mythology.
It represents the south, the season of summer, and the element of fire. It is said to resemble a quail in appearance and have a beautiful chirping voice."
—Shin Megami Tensei V lore

Zhuque is one of the gods that the protagonist must defeat in the "The Gold Dragon's Arrival" subquest. After the quest is accepted, it will appear as a strong enemy in the upper area of Shiba that can be reached by heading southwest from Tokyo Tower. Being a Lv.43 encounter, the protagonist and his party may have to wait until later on to defeat Zhuque for the quest's completion.

"One of the Ssu-Ling, celestial creatures in Chinese myth. It represents the direction south, the season of summer and the element fire."
—Persona 3 compendium

"One of the Ssu-Ling, celestial creatures of Chinese myth. It is a giant bird that is said to chirp in five beautiful voices. It represents the direction south, the season of summer, and the element of fire."
—Persona 5 background

Suzaku is the first Persona of the Sun Arcana and can only be obtained through fusion in the Velvet Room. It is the second of two Personas to learn the Frei skill and the first Persona to learn Ominous Words, Speed Master and Matarunda. When itemized through Electric Chair execution, Suzaku yields a Mafrei skill card. Suzaku is one of the Personas required to summon Kohryu using advanced fusion, the others being Genbu, Seiryu and Byakko.

Known as Suzak, he can perform the combo Evil Blaze with Redwing and Mega Flash with Solarius. Suzak also has the power FireWall. Suzakzom can be created through Relic Fusion using the Huge, Tusk, Mirror, the Air, Talon, Mirror, or the Air, Heavy, Tusk combos.

Known as Feng Huang. After the party has reached the top floor of the Karma Temple and if the party returns to the bottom, a tribe member will notify Serph that several enemies have occupied old areas, later to be called the Four Guardian Beasts. If Serph returns to Svadhisthana on the opposite side of the floor where the room with Beelzebub was situated, he will find Suzaku as a human and she will subsequently attack the party.

Her battle follows the same pattern as Gui Xian, consisting of three stages where her attacks get progressively stronger after dialogue sequences. If the party attempts to fully debuff her with -nda skills she will get "pissed off" and use Psycho Rage, followed by Dekunda, four Makakaja spells and then finish the sequence with either Maragidyne or Megidolaon. If the party casts any form of Fire Shield spell, she will use Tarukaja and Physical attacks during her turns. Finally, once Suzaku gets low on HP, she will warn the party that she will pick their bones dry and will use a very strong version of HP Thief the following round. This version of the spell can drain several hundred HP from a target.

One final note is that Suzaku does not possess the Dekaja skill, allowing the party to fully buff themselves unhindered.

"One of the Ssu-Ling, celestial creatures in Chinese lore.
It represents the direction south, the season of summer, and the element of fire. It is a giant bird that resembles a quail, and is said to chirp in five beautiful voices."
—Shin Megami Tensei: Devil Survivor 2 compendium

Suzaku is summoned by Hibiki to destroy a group of Legion demons shortly after Daichi and Io arrive at the place where the insurgeants are distributing provisions to a group of survivors.

"One of the Ssu-Ling celestial creatures in Chinese lore. The Four beasts were divided equally throughout the land to protect the five emperors in ancient China. There is even a mural depiction of them in Kitora Tomb in Japan. Huang, the Vermillion Bird, is protector of the south and represents the season of summer. It is gigantic, resembles a quail and is said to chirp in five beautiful voices."
—Shin Megami Tensei: Liberation Dx2 compendium

Suzaku, known as Feng Huang, is a common 3 star demon who can be fused or recruited. In the Aura Gate 2, Feng Huang is also an optional boss. Defeating it will unlock multi-fusion for Parvati.

Artwork of normal form in DemiKids

Artwork of zombie form in DemiKids 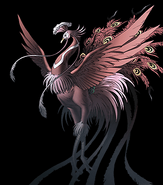 Suzaku as it appears in Persona: Tsumi to Batsu

Suzaku as it appears in Card Summoner

Suzaku as seen in Devil Survivor 2 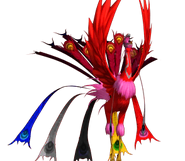 Suzaku as it appears in Persona Q: Shadow of the Labyrinth