Cassandra Morris
Sumomo Ujima is a character from Persona 4: Dancing All Night.

Sumomo is a youthful girl with short shoulder length brown hair tied in a loose short ponytail and brown eyes. Her dance outfit is similar to Kanami's, but bright pink with a large magenta ribbon lace on her chest, with matching magenta high heel boots.

Sumomo is an innocent and cheerful person. She appears to like cute things and often speaks in the third person. However, her personality was just an act in order to stay in character. Her true personality is a bit average and country and she often gives people nicknames.

Her insecurity is being seen as young and helpless. She dislikes that people see her as an innocent doll, as she only wants people to see her as herself.

After returning back to normal, it is revealed that Sumomo had doubts about leaving her village as villagers cheer her on. She tries her best to become someone that people would love and be proud of. She decides to open up to people as her real self, making her an honest, sincere and hopeful person.

Sumomo is a member of Kanamin Kitchen. She and the other members somehow ended up in the Midnight Stage. On Rise's search team, Sumomo is the first person that they find in her stage. Teddie notices that she is different than her TV personality, and Rise reveals a bit of her backstory (that she was born in a rural village far from the city and often helps out in the rice fields there). With the Eerie Voice taunting her about how everyone sees her as an adorable helpless girl, she denies it, and is forcefully dragged to her main stage.

After Sumomo submits to the shadow's will, she is transformed into a Shadow. Her shadow takes the form of a gigantic doll in a pink dress with one of her eyes pierced through by a giant needle.

After she reverts back to her normal self, she is kept safe inside of a place that resembles a dressing room in Takura Productions. Soon out of nowhere, Ochimizu appears, apparently safe and unharmed, and decides to stay with Sumomo while Rise's team go and saves Nozomi.

She and other members reappear in Chapter 7 where she encourages Kanami to not give up and they see her as a friend. 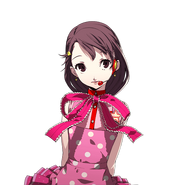