Sumeo-Okami is a Persona in the series.

"Sume-Omikami" (皇大御神) is an epithet for the goddess Amaterasu meaning "Imperial Great Goddess," referencing how the emperors of Japan were traditionally held to be descendents of Amaterasu.

Yukiko Amagi's new ultimate Persona after the protagonist has maxed out her Social Link, and talked to her after 1/10.

Sume-Omikami in Persona 4 The Golden Animation 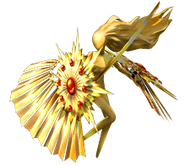