Sukuna-Hikona is a demon in the series.

Sukuna-Hikona, also known as Sukunabikona or in full, Sukuna-Hikona no Kami (少彦名神*)?, is the Japanese dwarf deity of healing and sake brewing and is associated with hot springs. He assisted Okuninushi in building the world and formulating protections against disease and wild animals in myths from the Izumo region.

He first arrived in Izumo in a small boat of bark and clad in goose skins. Later, he was picked up by Okuninushi, and Sukuna-Hikona promptly bit him on the cheek. The two, nevertheless, became fast friends.

His shrine is located in Dosho-machi, Osaka.

Sukuna-Hikona is one of the Kunitsu who were convinced to ally themselves with the Hebrew God to confront the Amatsu, only to be betrayed and imprisoned inside a shrine in the Abyss and required to be escorted out. He holds a fragment of Masakado's corpse, in his case, the left leg.

Sukuna-Hikona, despite having held a placeholder role in the game's files for years, has yet to be introduced as a player demon. He does appear as an non-playable character central to the Chain of Curse storyline, where he aids the player in lifting Omoikane's curse and confronting a crazed Take-Mikazuchi in Shibuya's metro. Sukuna-Hikona is a blunt character that doesn't hesitate to insult the player if they come unprepared-- such as when the player refuses him Magnetite in some parts of the storyline.

In the Basilica, he will spawn at a random location on the New Moon phase and can drop soul point vouchers. He will only be able to be damaged by one of the four elements randomly and has incredibly high critical and critical defense. If not defeated before the phase is over, he despawns.

Sukuna-Hikona is the final guardian of the Ark in Kanda-no-yashiro, which seals away Krishna, leader of the Divine Powers who threaten everyone who lives in Tokyo and the world. He is one of the few Kunitsu to not believe the Allfather's lies. As the battle goes pose a question to Nanashi, which affects the battle depending on the response:

During the battle, Sukuna-Hikona will attempt to inflict ailments upon the party, lower their Defense and use Physical skills to strike the party. He has no response to his own attributes being lowered. Physical based characters can take advantage of his weakness using stones or a Smart Bazooka loaded with Erthys rounds that can be obtained in Ueno. The Bare Chest or Blue Marine body armors will mitigate damage from his elemental attacks. Upon defeat, he laments that this is the price the gods of Japan pay for having kept peace through force and force alone, crumbling afterwards. He also retains his weakness to sick, though he also has Posumudi, and will use it immediately.

Sukuna-Hikona can be fused through a special fusion of Okuninushi, Mermaid and Gu Huo Niao. He can teach Nanashi, the Makajam and Concentrate skills through his Demon Whisper, but his unique skills cannot be passed on in any way. Sukuna-Hikona benefits from learning Ice, Force, ailment, Physical and support skills.

"One of the gods of Japanese lore. Son of Kamimusubi, he was so small he fell through her fingers at birth.
Though he would normally be counted among the Amatsukami, he became blood-brothers with Okuninushi, and is now considered a Kunitsukami. After building Japan with Okuninushi, he is said to have returned to Tokoyo no Kuni, the land of eternity."
—Shin Megami Tensei V lore

Sukuna-Hikona is a member of the Kunitsu race and can be obtained as an ally through a special fusion of Koropokkur, Azumi and Kaya-no-Hime.

"My power comes not just from my own body... It is born from the accumulation of the hatred of all those oppressed since ancient times... It cannot be stopped by the likes of a Kuzunoha!"
—Sukuna-hikona, Devil Summoner: Raidou Kuzunoha vs. The Soulless Army

Sukuna-hikona plays an important role in the events of the story. In Raidou Kuzunoha XIV's confrontation with Major General Munakata, the general is ultimately revealed to be manipulated by Sukuna-hikona within his body. Crawling out Munekata's body through his mouth, Sukuna-hikona engages Raidou to a battle.

Furious with "the servants of the Amatsu" for driving back his own people, Sukuna-hikona hates all humans in the Capital, and agreed to use the mystery demon possessing Kaya Daidouji's plan to destroy it with the Soulless God Oumagatsu, a massive war machine, and the titular Soulless Army, a group of undead soldiers retrofitted with special armor and techniques.

Despite Sukuna-hikona's miniature size, he is a powerful foe, capable of using a special skill that seals Raidou's movement for a time being. Should the seal hit Raidou's demon allies, they are forcefully ejected back to into their tubes, forbidding Raidou to resummon them until the end of the battle. It is revealed in Devil Summoner 2: Raidou Kuzunoha vs. King Abaddon that he was possessed by the rage of the Kunitsu, turning him into the being seen in-game.

Sukuna-Hikona appears as Naoto Shirogane's Initial Persona. Even though Sukuna-Hikona is a deity of medicine it is unable to learn healing spells, but instead specializing on Light and Dark skills along with Almighty attacks. However, the Shadow it manifested from had wanted to perform a "body-altering operation" of sorts.

Sukuna-Hikona's design is reminiscent of the Kamen Rider series, having a bug-like (particularly a butterfly, similar to Metis' Persona, Psyche) superhero motif. When Naoto's Social Link is maxed, Sukuna-Hikona evolves into Yamato-Takeru.

Sukuna-Hikona returns as Naoto's Persona. It utilizes Hama and Mudo skills which can either inflict Break or outright KO the enemy, and is one of only three Personas capable of using Megido skills (albeit as a hair-trigger type bomb), the others being Pallas Athena and Thanatos.

Sukuna-Hikona is also one of the Personas possessing a skill it cannot learn in the original games, with it being able to learn Double Fangs (and is also shown as a non-Persona attack).

In Ultimax, the latest skill it receives is Blight (Venom Zapper in Japanese), a skill it can learn naturally in Persona 4.

After completing a song, Sukuna-Hikona can be summoned to play a violin. 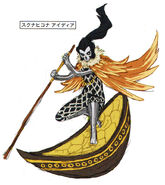 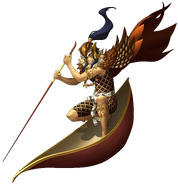 Sukuna-Hikona as he appears in Shin Megami Tensei IV Apocalypse

Sukuna-Hikona as he appears in Shin Megami Tensei IMAGINE

Sukuna-Hikona, as seen in Raidou Kuzunoha vs. The Soulless Army 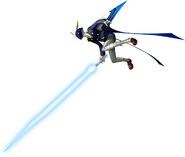 Sukuna-Hikona with the other Personas of the team

Sukuna-Hikona in the manga adaption

Concept artwork from Persona 4 The Animation 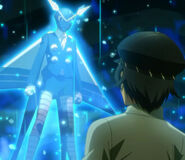 Sukuna-Hikona appears in Persona 4 The Animation

Sukuna-Hikona in Persona 4 The Animation

Sukuna-Hikona playing the violin in Persona 4: Dancing All Night 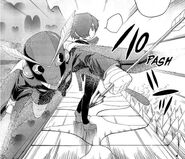 Sukuna Hikona in Side: P3

Sukuna Hikona in Side: P4