Phillip Reich
"Only a handful of people are qualified to alter the world."
—Sugimura to Haru

Sugimura is a character from Persona 5. Haru Okumura is engaged to him against her will for her father's own political ambitions.

"So you've been coming home late. That's what I've heard. I make a good playmate, you know."
—Sugimura to Haru

Sugimura is shown to be a highly violent and sleazy playboy, as when Haru did not answer his calls for her, he assumed that she was with another man and began to act in a highly abrasive manner. In fact, he is one of the few cases where his cognitive copy doesn't have much differences in personality compared to his real self. His relationship with her is abusive and controlling, having no true affection for Haru besides seeing her as an object he can play with for his pleasure, and even sees no qualms into polygamy. He also acts very hostile towards basically anything that would get in his way, as he shows no mercy to Morgana who attacked his leg when he was harassing Haru by kicking him to a wall. When the party rushes by to assist the two, he even vows to have Okumura take action before leaving.

Despite this, he has absolutely no standing when Okumura died, as his allowance is the sole thing that backs him up as Haru's fiancé. Without Okumura's backing, he has no choice other than to leave Haru alone.

Sugimura is the fiancé of Haru Okumura. Like Haru, he is also extremely wealthy and comes from a rich and influential political family. He apparently wears an expensive business suit everywhere he goes to show off his affluence. Due to his family's immense political power, Kunikazu Okumura believes that the arranged marriage of him with Haru will let him politically compete with Masayoshi Shido as president despite the fact he only treats Haru as a sexual plaything. Both Okumura and his daughter are aware of this, although Okumura couldn't care less due to being blinded by political gain. Despite the fact that arranged marriage is legal and socially acceptable in Japan, Sugimura's repulsive personality and Okumura's sheer ignorance of the situation force Haru to go after Okumura despite her initial reluctance.

He first appears in Shibuya to look for Haru one night after she runs away with Morgana from Mementos. He attempts to force her into sex, to the point of grabbing Haru's arm, rationalizing that it is acceptable since they are engaged. Morgana attempts to save her, only to be kicked against a nearby wall. His yelling for help attracts the rest of the Phantom Thieves of Hearts to the scene. When they defend Haru and confront Sugimura, he swears to take revenge on all of them later.

When the party re-visits the biometric corridor in Okumura's Palace, they encounter a cognitive Sugimura standing next to Shadow Okumura. His fake self admits that he no longer wants Haru as his wife, and Okumura, well aware of the true color of his son-in-law-to-be, declares to Sugimura that he could have Haru as his lover or plaything rather than his wife, so long as Sugimura holds up his end of the deal. This revelation angers Haru and leads to awakening to her Persona, Milady. The cognition transforms into a large Corporobo and attacks the group, only to be defeated by the Phantom Thieves.

In the bad ending triggered by failing to meet the Okumura Palace deadline, Haru is forced to marry Sugimura while the protagonist is arrested by the police after a mysterious tip reveals that he is a Phantom Thief. This scenario is a false recollection made by the protagonist during Sae Niijima's interrogation, due to his mind being addled by drugs forcibly administered to him by the police. Sae proceeds to leave the room to give the protagonist time to recover, at which point an assassin takes the opportunity to kill him.

When the news announces the apprehension of the protagonist, Sugimura is seen riding with Haru in a sedan. He comments that Kunikazu's death has been avenged and mocks the Thieves for their inability to change anything. He then tries to seduce Haru, only to be interrupted when she sees the protagonist on the news.

During Haru's Confidant, he makes a brief appearance to claim that Okumura made a written contract with him that ensures Haru will marry him. As later revealed by the acting president of Okumura Foods Takakura, he had never heard of this contract before, and he deducts that Okumura made it during one of the meetings that he held with a group of pro-Okumura staff members from the company. Takakura then proceeds to promise Haru that he will void the contract, and Sugimura quietly falls out from her life.

The battle with cognitive Sugimura is mainly to demonstrate Haru's battle prowess. Use Psychokinesis attacks to get extra turns on him, and pass off to anyone with Fire or Wind attacks to Down his Corporobo WKR minions.

Sugimura is assisted by two Corporobo MDL-WKR. They can use Recarmdra and sacrifice all but 1 of their HP to heal him.

Cognitive Sugimura about to transform

Sugimura in Persona 5 The Animation 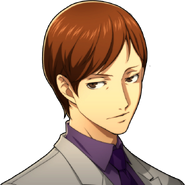 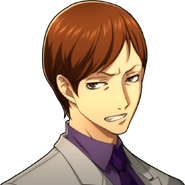 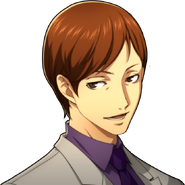 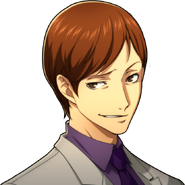 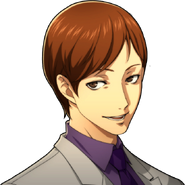 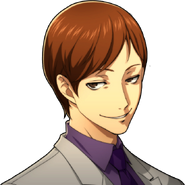