Succubus is a demon in the series.

A Succubus is a demon or spirit from European folklore during the medieval ages, which takes the form of an attractive female to seduce men. Their male counterpart is the Incubus. They were either spawned by the legions of Hell or appeared as creatures of the night, just like vampires. They are believed to have sexual intercourse with sleeping men.

They draw energy from men to sustain themselves, often until the point of exhaustion, the deterioration of health or the death of the victim. Lilith and her daughters, the Lilim, are considered succubi. Succubi encounters have also been theorized as an attempt to explain birth defects or sometimes adultery.

"Origin: Germany. A female dream demon. She enters men's dreams and has sex with them there to drain their life energy. They're said to collect men's semen to give to Incubi, which is used to impregnate women. Some believe they like to appear to clergymen in their dreams to corrupt them."
—Shin Megami Tensei A-Mode DDS dictionary

"A type of demon that appears in dreams. It appears at the bedsides of men and sucks their life energy. A succubus takes the form of a woman, while an incubus takes the form of a man. When a succubus appears before a man, she renders herself into the image of the man's ideal woman. The succubus uses the life energy of her victims to spawn other demons and evil spirits.
The reason that these demons use dreams is that they are not strong enough to physically attack their prey, but instead excel in attacking their minds. They are weak to anything holy, and placing a crucifix on one's pillow is said to ensure that they stay away."
—Shin Megami Tensei IMAGINE compendium

Succubus can be contracted at night in Ikebukuro field. She appears as a field boss in Shinjuku Babel's docks and an enemy within Suginami's Diaspora instance and Ichigaya's hack instance. When equipping gear infused with her soulstone and a soulstone of Incubus, it is possible for players to use the skill Dream Eater, which drains HP from sleeping enemies and recovers HP for the player.

Players of both genders can acquire equipable, moving versions of her wings.

"A female demon of European lore in medieval times. They visit sleeping men and have sexual intercourse with them; the victims don't wake up, but may dream of the encounter."
—Shin Megami Tensei: Strange Journey compendium

Succubus appear as an enemy in random encounters in the later floors of Sector Grus.

Succubus appears in Shinjuku in the Kabuki-Cho passage, Kabuki-Cho and Golden Gai areas. She can teach Nanashi the Sexy Dance, Sukunda, Me Patra and Spirit Drain skills through her Demon Whisper. Succubus benefits from learning ailment, Ice, healing and support skills.

Succubus specializes in impairing the enemy through Ailments. She can be found during Shuffle Time in the Secret Laboratory.

"A female demon of European lore in medieval times. They visit sleeping men and have sexual intercourse with them. The victims don't wake up but may dream of the encounter."
—Persona 5 background

Succubus is the first Persona of the Moon Arcana and can be found as a Shadow in Kamoshida's Palace and the Aiyatsbus area of Mementos, with the title "Twilight Prostitute." She is the first Persona to learn the Marin Karin, Rebellion, Dekaja, Brainwash Boost and Mudo skills. When itemized through Electric Chair execution in the Velvet Room, Succubus produces the Brain Shot SMG for Ann Takamaki, which has 140 ATK, 84 ACC, can fire 12 times per round and adds the Brainwash (med) effect to Ann's Gun attacks.

The Shadow of Mrs. Asami Magario takes the form of Succubus during the request "Daughter's Just a Meal Ticket." She and the Shadow of her husband, Shadow Mr. Kouta Magario, can be found in the third area of Adyeshach. Shadow Mrs. Magario will lack a weakness to Gun and Bless skills and will attempt to put party members to sleep with the Lullaby skill. Should any party members fall asleep, Shadow Mr. Magario will target them with the One-shot Kill Gun skill.

"A female demon of European lore in medieval times. They visit sleeping men and have sexual intercourse with them. The victims don't wake up but may dream of the encounter."
—Persona 5 Strikers background

Succubus is the first Persona of the Moon Arcana and can be found as a Shadow in the Shibuya Jail.

Succubus becomes the subject of the request, "Gusts of Punishment," in which the party will have to defeat three Succubus Shadows by using their weakness. The killing blow must be dealt with an appropriate skill to count.

"A parasitic demon who lives in dreams and feeds of the imagination of its house."
—Demonary, DemiKids

Succubi appear as common enemies in the Solids' HQ.

"Originating in European folklore, the Succubus is the female counterpart to the Incubus. They visit men in their dreams sucking the life force out of them. They appear as great beauties in dreams, but in fact are ugly hags."
—Shin Megami Tensei: Liberation Dx2 compendium 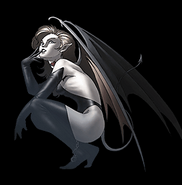 Succubus as she appears in Card Summoner