Strega (ストレガ, Sutorega)? is a group of Persona Users who form the secondary antagonistic group in Persona 3. They are Takaya Sakaki, Chidori Yoshino and Jin Shirato.

Strega is a group of three rogue Persona Users who use the Dark Hour for their own personal benefits. They set up an internet website called "Revenge Request" where users can contract Strega to commit assassinations and other illegal activities, which the three carry out during the Dark Hour as they remove the protection of the coffins which allows them to do whatever they want with their victim. The members of Strega are artificial Persona users created by the Kirijo Group. They were picked up off the street and used as fodder for the corporation's experiments. Because their Personas were not awakened naturally, they must take suppressants supplied by Shuji Ikutsuki. The drugs keep their Personas from killing them, but have lethal side-effects. Out of the original hundred kids Kirijo used, only Strega survived.

In their first encounter with the SEES members, they attempt to learn of their goals by spying on them. Finding out that SEES aimed to rid the Dark Hour, the two groups became enemies. For the remainder of the game, the two groups would clash. In one particular encounter, SEES managed to capture Chidori, Strega's data gatherer (like SEES' data gatherer, Fuuka), thereby weakening the group in the process. Takaya would later set up Ken and Shinjiro in an attempt to turn SEES against each other. Takaya attempted to manipulate Ken into killing Shinjiro, but when this failed, Takaya instead attempted to shoot Ken, only for Shinjiro to take the blow by jumping in the way of the bullet. Prior to fighting the 12th Shadow, Takaya and Jin made a final stand to prevent SEES from destroying the last Shadow, only to be defeated. Rather than accept life without the Dark Hour, the two jumped off the bridge they battled on, seemingly committing suicide.

A month later the two would appear again, alive, appearing before a hospitalized Chidori. They convinced her to rejoin them, turning her against SEES. When Junpei managed to convince Chidori not to walk down the path, Takaya shot him, killing him in the process. Chidori would then sacrifice her life in exchange for his, resulting in Junpei evolving his Persona and attacking Strega. Disappointed by this act, Takaya and Jin fled. Near the end of the game, the two would start a cult for those who wished for Nyx's coming, and also manipulated the public into hating SEES by making them responsible for the Dark Hour. The two would later make a last stand in SEES's final mission, although both are defeated, with Jin dying in the process. Takaya is last seen lying on the ground next to the SEES members during Nyx's final assault. His final status is unknown, but it is assumed he is dead.

Strega on the cover of Persona 3: Shadow Cry

Strega as they appear in Persona 3 The Movie 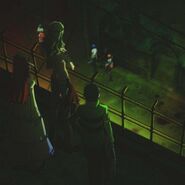