St. Hermelin High School (聖エルミン学園, Sei Erumin Gakuen)? is a location in Megami Ibunroku Persona. It is the school that the protagonist and his friends go to and is set in the town of Mikage-cho.

It's a large building with a swimming pool, a newly remodeled gym and several extracurricular clubs such as Ballet and Archery. The uniform is grey and white. The school's Drama club has a long history of putting on performances of The Snow Queen, a play by Hans Christian Andersen. However, with one exception, every single girl who played the titular role in the play either died in unusual circumstances or committed suicide, leading to the Principal issuing a ban on the play.

During the SEBEC route of Persona, the school is the only place in Mikage-cho that isn't infested by demons. Later on, St. Hermelin completely disappears with a haze covering the area the school inhabited; presumably coinciding with the Snow Queen Quest, where the school is transformed into a four-towered castle covered in ice.

In the Ideal Mikage-cho, St. Hermelin's is generally the same with the inhabitants having different personalities from their real world counterparts. The ideal school is regularly terrorized by a "girl in black" which has most of the populace fearful.

In Persona 2, several students from St. Hermelin can be seen around Sumaru City. In the PSP edition's Climax Theater, the two-part story School of the Heart takes place in St. Hermelin. Maya Amano is sent to write an article about the successful class 2-3 ran by Mr. Kariyazaki, taking the other party members along as her "assistants." 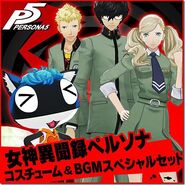 Uniforms in Persona 5
Community content is available under CC-BY-SA unless otherwise noted.
Advertisement