Sraosha is a demon in the series.

Sraosha is one of the most prominent Yazatas ("worthy of worship"; sometimes translated simply as "angels" though this view is not entirely correct) in the Zoroastrian faith. Unlike many other Zoroastrian figures, he has no counterpart in Vedic texts. His name corresponds to the concept of obedience. He propagates religious doctrine on earth, and serves as a medium between the faithful and Ahura Mazda (Ohrmazd). While he's already prominent in the Gathas, the oldest Zoroastrian sacred texts, in later sources, he was eventually elevated to a position almost equal to that of Ohrmazd himself, being tasked with protecting the material world.[1] In this role, he's a scourge of evil beings. His strength is described as unusual, and the weapon he uses to dispatch evildoers is a club. His archenemy and antithesis is Aeshma, also known for using a mace.

In the Avesta, a few passages associate him with Rashnu and Mithra. Later texts expand this association, making them a trio of judges who decide the fate of each soul in the afterlife. Sraosha also serves as a psychopomp, protecting the righteous souls from attacks of demons (especially Aeshma) while they cross the Chinvat bridge, behind which lies the Zoroastrian heaven. It's also said that during Frashokereti, a day of universal renewal and ultimate triumph of Ohrmazd, Sraosha will assist him in judging humans. This will also be the day of his ultimate triumph over Aeshma.

Due to his prominent role in many of the legends derived from Zoroastrian texts which were collected in the 11th century epic poem Shahnameh, Sraosha is also present in Persianate Islamic art as an angel named Surush.[2][3]

Sraosha can teach Nanashi the Holy Wrath, Diarahan, Judgment Light and Concentrate skills through its Demon Whisper. It benefits from learning Light, healing and Almighty skills.

Sraosha appears before the protagonist during their trip in the Empyrean, challenging them to see if they are worthy of the throne, having tested the other Nahobino pairs already.

Sraosha represents the bond between Yu and his cousin, Nanako Dojima. He was first summoned during the battle against Kunino-sagiri, where he used Mahamaon in order to finish off all of the remaining enemies.

Later on, in the True Ending special, Sraosha appeared to defend against Margaret's Helel when Yu had given up fighting, along with a message from Nanako to support Yu. He is one of the two ultimate Personas that Yu summoned that was not created through fusion, the other being Isis.

"In Zoroastrian lore, Sraosha's duty is to listen to the cry of humans for Ahura Mazda. He is also known to descend after sunset to vanquish evil. His name literally means "observance.""
—Persona 5 background

Sraosha is the ninth Persona of the Star Arcana and can only be obtained through an advanced fusion using Mithra, Mithras, Melchizedek, Lilith and Gabriel. Sraosha is unlocked for advanced fusion once the protagonist reaches rank 5 in the Strength Confidant with Caroline and Justine. Sraosha is one of four Personas to learn Angelic Grace and Debilitate. When itemized through Electric Chair execution in the Velvet Room, Sraosha produces the Archangel Bra female armor, which has 200 DEF, 18 EVA and adds the Reduce Elec damage high effect to the wearer.

Sraosha appears as soldiers in the Heavenly Host. In Amane's 8th Day, a Sraosha appears after they convince the first two people to repent for their actions and observes them as they speak, telling that what they say is genuine. Sraosha tells them that the angels will not pass judgement upon them and to repent by being judged by man's laws for their previous crimes. After they leave, Sraosha tells the protagonist that they performed magnificently and that they witnessed a great stride towards a world of the lord's order before leaving.

"One of the three guardians that watches over the souls of the dead as they cross the Bridge of Judgment.
In Zoroastrian myth, Sraosha's duty is to listen to the cry of humans for Ahura Mazda. Also known to descend after sunset to vanquish evil. Its name literally means 'observance'."
—Devil Survivor 2 Record Breaker compendium

Sraosha appears as one of the downloadable demons in the game. He can only be fused using Mithra and Lailah. 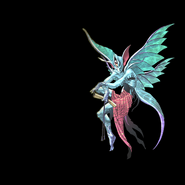 Sroasha as he appears in Persona 4

Sraosha's artwork as it appears in Persona 4: The Animation

Sraosha as he appears in Shin Megami Tensei: Strange Journey

Sraosha as he appears in Card Summoner

Sraosha as he appears in Persona 4: The Animation

Sraosha as he appears in Persona 4: The Golden Animation

Sraosha as he appears in Persona Q: Shadow of the Labyrinth

Sraosha as he appears in Persona 5 Royal