Sphinx is a demon in the series.

Sphinxes, or Sphinges, are mythological creatures that originated in Egypt, and was later imported to Greece, with the word "sphinx" itself being of Greek origin. The Egyptian sphinx is most often depicted as a reclining lion with the head of a human man. Less commonly, it will be a lion with the head of a ram, in which case it is called a "criosphinx." The most well known example of the Egyptian sphinx is the Great Sphinx at Giza.

The creature was later imported into Greek mythology, where it became a daughter of Echidna and Typhon. This sphinx is described as having the head (and in later times, breasts) of a woman, the body of a lion, and the wings of an eagle. It sat on the road to the city of Thebes, and asked all who passed by a famous riddle: "What creature walks on four legs in the morning, two legs at noon, and three legs at night?" She killed all those who answered wrong. Oedipus finally gave the correct answer of "man," and the Sphinx immediately killed herself in rage.

The Greek version of the Sphinx is depicted as treacherous and merciless. Those who cannot answer its riddle suffer a fate typical in such mythological stories, as they are killed and eaten by this ravenous monster. However, not all Sphinx in Greek mythology were malevolent as some were actually benevolent in a sense. In addition, the Egyptian sphinx was viewed as benevolent, but having a ferocious strength similar to the malevolent Greek version and both were thought of as guardians often flanking the entrances to temples.

Sphinx first appears alongside Seth in his boss room in the Abyss Tower instance of alternate Shinjuku Babel. It also appeared in the Ordeal of Soul event instance alongside Anubis. It was implemented as an obtainable PG and plug-in during the follow-up event.

"A beast from Greek lore with the head and breasts of a woman, but the body of a lion and feathered wings. The goddess Hera sent her to Thebes, where she asked a riddle of those attempting to pass. Oedipus answered correctly and she threw herself off the cliff, killing herself. In Egyptian lore, she was a statue related to the sun god. One Sphinx had the head of a pharaoh."
—Shin Megami Tensei IV compendium

Sphinx can teach Nanashi the Mediarama, Mahamaon, Grand Tack and Mediarahan skills through its Demon Whisper. It benefits from learning healing, Gun and Light skills.

"To think the cognitive version of a person would transform into such a horrible monster and attack us..."
—Yusuke Kitagawa, Persona 5

Cognitive Wakaba Isshiki is the the boss of Futaba's Palace and takes the form of a giant Sphinx with Wakaba's head. Unlike most Palace Bosses, she is not the battle form of a Shadow Self (and in fact Shadow Futaba appears as an ally), but a Cognition formed from Futaba Sakura's survivor guilt, desire for self-destruction and belief that she was an unwanted burden on her mother. (In other words, this is how Futaba views Wakaba.) As Futaba never interacts with others, Cognitive Wakaba is the only Cognition within the Palace. She has a spiteful and vengeful personality, existing only to "punish" Futaba for being the reason the real Wakaba died (as Wakaba sacrificed herself to save Futaba) and repeatedly mocks both her and the Phantom Thieves of Hearts for being childish and useless.

A Sphinx is the demon partner of Nagahisa Kai and the one demon he uses throughout the game.

"With courage far exceeding its size, this small demon is a force to be reckoned with."
—Demonary, DemiKids

Sphinx can be obtained by defeating Nagahisa in BattleNet. Sphinx also has the power Anti-Evil.

Sphinx is the Atma Avatar of Zaphir, one of the two bodyguards of Jinana. She is credited as the fastest Atma in her own tribe. During the raid of Solids' citadel in Anahata, Sphinx carries Serph along with the unconscious Jinana who is near the verge of being completely overwhelmed by the hunger back to Embryon's base in Muladhara in order to allow her be treated by Sera. The desperate rescue is successful.

"A beast from Greek mythology with the head and breasts of a beautiful woman, the body of a lion and hawk-like wings. In a rage, the goddess Hera sent Sphinx to punish the people of Thebes, where Sphinx asked a riddle of those attempting to pass, eating those who could not answer. The hero Oedipus answered correctly and in shock threw herself off a cliff, to her death. However, in Egyptian lore, she was worshiped as a symbol of the sun god."
—Shin Megami Tensei: Liberation Dx2 Demonic Compendium

Sphinx as it appears in the Devil Children Manga 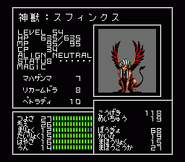 Sphinx as it appears in Last Bible Special