View source
watch 02:40
World of Warcraft: Dragonflight - The Loop
Do you like this video?
Play Sound
"A group devoted to defeating Shadows. Under the guise of a school club, they wield their Personas."
—Persona 3 FES Dictionary Entry

"Such a pity... You understand fate, yet you still fight against it with all of your will... If more people were like you, then perhaps the Fall could have been prevented... but it's too late now."
—Nyx Avatar talking about SEES, Persona 3

While the school sponsors them and lists them as a school club, their true purpose is to eliminate the Shadows and investigate both Tartarus and the Dark Hour. Their advisor is Shuji Ikutsuki and Mitsuru Kirijo functions as the club leader. The protagonist or the female protagonist ends up leading the club in many instances due to their unique abilities. Other than Ikutsuki, all the members of SEES are Persona users. Additionally, all the members are students at Gekkoukan, other than Ken Amada and Koromaru. After school, they stay at a Iwatodai Dormitory. SEES is also backed up by the Kirijo Group, as well as certain members of the police such as Kurosawa, providing them access to anti-Shadow technology and weapons.

SEES reforms in order to investigate the Abyss of Time after all of the members become trapped in the dorm.

SEES, after combining with the Investigation Team from Persona 4, uses the alias "Team Gekkou."

The P3 hero's SEES was suddenly caught in the movie world when Tartarus suddenly collapses and the only way to escape is from a light at the top. They enter the light and instantly enter the movie reality A.I.G.I.S, where the P3 hero and Aigis were lost, as they were captured by the Overseer and are on their way to escaping the lab, only to be outnumbered and cornered. The party will encounter them fighting a group of KNS-1000 in the research lab area, where they were seemingly overwhelmed as Aigis' Orgia Mode failed to impact them and the P3 hero's Evoker was lost. The party rescues them by helping them fight the F.O.Es and they escape the movie to the cinema and join the party. The P3P heroine does not enter the movie world via Tartarus. Instead, she lands into Kamoshidaman from the Velvet Room via a dream during her study nap. As a result, she enters the movie world alone without assistance from her teammates.

The encountering between the P3 hero's SEES and the P3P heroine also proves to be traumatic for the latter, as none of them recognize her due to the fact that she came from an alternate reality despite appearing as identical people that she knows, resulting in her developing a strong sense of confusion and alienation and inversely the SEES members are also shocked and confused that she knows their names and has a real SEES armband and Evoker despite they never met her before. Therefore, the SEES members plan to know her more on the side quests. However, the P3 hero is capable of recognizing the P3P heroine instantly, as she is an identical existence of him in another reality.

The P3P heroine's SEES is seen welcoming her return to reality when she seemingly awoke from her studies. She felt an uneasy nostalgic feeling about the "dream" she experienced, but cannot explain why. Their response afterwards is identical, in which they bought food and drinks for her to watch a sci-fi movie under the chairman's permission.

The members, in the order they effectively joined, is as follows:

The members of SEES facing their respective Personas.

SEES on Spring of Birth" poster

The members of SEES on Midsummer Knight's Dream poster

SEES on Falling Down poster

SEES on Winter of Rebirth poster

The members of SEES on Winter of Rebirth" poster 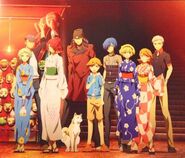 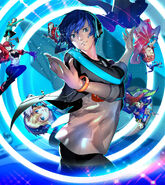