Tsukuyomi
Sousei Kurogami is a mechanized detective and Naoto's partner in Persona x Detective Naoto. He is the final Anti-Shadow Suppression Weapon built by the Kirijo Group.

Sousei is a humanoid android with short, jet-black hair that covers his forehead, reddish purple eyes, skin of healthy complexion and defined facial features. Unlike the other Anti-Shadow Suppression Weapons, his body is extremely bulky and even more mechanical, giving him a very masculine appearance. While his torso a black sleeveless leather vest and a rather elegant white scarf, his arms and legs are made up of various red and black motorcycle parts. Several of his limbs are marked with "R-00," which is also part of his true name.

His transformed appearance is based on a modern motorcycle. In the tenth issue of the Persona Magazine, Shigenori Soejima explained this was influenced by his personal love for motorcycles. Early concept art also indicates that he was originally meant to be able to transform into a motor scooter, a trait that was eventually moved to Ai.

A guileless and mechanical individual, Sousei can be quite unpleasant due to his temper and rough speech, often falling into distinctly childish behavior, earning him a simple-minded label from Naoto. Despite this, he views fellow android Ai as his sister and can be deeply caring and trusting once he bonds with another person, leading him to at times not question their motives or behavior.

Sousei highly respects his creator and surrogate mother, Yuri Kurogami, who treated him like her own child after he was deemed a failure by the Kirijo labs and fought for his rehabilitation. Furthermore, he values Touko due to her friendship with Yuri, treats her like an ultimate moral authority and follows her orders blindly. After a rather rough first meeting, he also begins to form a close friendship with Naoto. He has a strong sense of justice and an unshakable trust in those he considers his friends, which results in a dispute with Naoto concerning her methods and their conflicting opinions and impressions of Touko.

Sousei's speech can be described as typically male from a Japanese perspective due to his use of very masculine and conceited pronouns like "ore" (俺) and "ore-sama" (俺様). Furthermore, this style of speech is considered rude in Japan and is thus almost exclusively used in the media. Tetsuma suggests that Sousei copied these expressions from TV shows he watched during the time he spent with with Yuri, but also blames Sousei's rough manners on himself and Touko for having a loose tongue. Tetsuma also concludes that Sousei's impolite, brash and overly masculine way of talking is actually an attempt to hide his innate shyness and insecurities, two traits that are the result of having been deemed a failure by the Kirijo Group.

Originally known as "Genesis," an Anti-Shadow Suppression Weapon of the Kirijo Group during the Shadow experiments in 1999, Sousei was designed and developed secretly by Yuri Kurogami and Tetsuma Tsuge as a back-up for the 7th Generation of androids and is the longest active out of all androids, having survived the death of his designer and the death of Takeharu Kirijo in 2009. However, he was considered a failure by the researchers since Tsukuyomi, unlike Palladion, is a non-combative Persona who has no battle abilities at all.

The Kirijo Group transferred both Sousei and Tetsuma Tsuge to Yagokoro City as a result of various violent crimes in the city. He is partnered with Naoto Shirogane by Touko Aoi in order to investigate a chain of disappearances of local high school students that seem to be related to a mysterious website called "Mayonaka Site." In his first encounter with Naoto, he attacks her, reacting poorly to an attempt to acquire a more combat suitable Persona. This awakens her own Persona and the ability to amplify his powers. 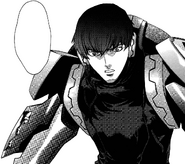