The story stars outlaws living in the underworld faced against the end of the world.

The 4 party members all likely learn and grow like standard party members, developing their own stats and skills as they level up. They are also able to equip a demon, which serves as an upgrade to their stats and lets them use their skills. Under normal circumstances, they can re-equip a demon mid-battle, but it'll take them a turn to do so.

The affinity chart of the game is simplified, only featuring Fire, Ice, Electricity and Force, as well as Almighty. Physical skills are also paired with Gunfire.

The party members' COMPs can be customized at a COMP smith, allowing them to enhance their devices with special effects, assuming that they have the materials and the respective fee required for the upgrade.

Additionally, these COMPs also have additional properties, such as "mystique adaptation," which is separated against all elements on the affinity chart, as well as miscellaneous skill types, such as Ailments, Recovery and Support.

The game also has social mechanics, where Ringo can spend time with her allies and increase their Soul Level.

In addition, as a pre-order bonus, users gain access to custom outfits of several characters from Persona 5, particularly the protagonist, Ryuji Sakamoto, Ann Takamaki and Goro Akechi, can be equipped:

It also allows to change the battle music to "Keeper of Lust" from the same game, and includes an accessory that increases the Critical rate of the user's Gunfire attacks. 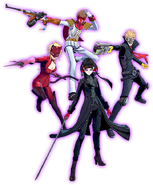 During a post-announcement interview, Ishida remarked that they decided to develop Soul Hackers 2 primarily due to fan requests for a sequel of Devil Summoner: Soul Hackers, but his own reason for planning the title was that he found the inclusion of science fiction elements in the original to be quite sharp for games among the Shin Megami Tensei series. He thought he could replicate the feeling of the original by making use of themes, such as technology, people, the occult as well as the relationship between those elements. But in spite of fan request, Ishida worried that said original entry might have been forgotten, since it came out 25 years prior, and even the DS remaster came 10 years ago.[3]

On the title and why it omits mention of Devil Summoner, Hirata explains there are various reasons for the choice, one being that the theme revolves around technology, but he also wants to bring the name "Soul Hackers" to the front.[3]

On the themes of the game, where the first focused around a network, the second would revolve around the existence of Aion, which is created from accumulation of information. Soul Hackers 2 instead observes people, depicting "what a human being is" from the viewpoint of technology.[3]

Ishida and Hirata both worked as directors and producers, co-operating in the process. Ishida explains one of the reasons for that is that the evolution of game consoles has increased the scale of development for each game, making it difficult for one person to take the initiative. From their time on Tokyo Mirage Sessions ♯FE, the saying "if you want to develop a big title, let's do it together" was since used as the basis of their plan to work together. As collaborating directors, Ishida is primarily in change of the worldview of the game, while Hirata observes the system side, and they both use their roles as producers to view the big picture.[3]

The game would first be teased, only via its relations to Devil Summoner: Soul Hackers. On February 17th, 2022, 4 daily streams would be hosted on ATLUS' Japanese YouTube channel, each starting at 8pm JST. These streams consisted of gathering information from users, and each stream would hold 3 questions, each separated by 10 minutes. The session is most likely a replication of feeding Flamma of Aion information, who would directly speak during the streams.

At random intervals during the streams, the term "Ringo" would constantly be brought up, alluding to the game's protagonist, and several vague screenshots of the game's setting and characters would be shown.

During a stream on February 21st, the protagonist Ringo would be unveiled as part of a live-action fight sequence over at Kanda Shrine, which would end with the reveal of Soul Hackers 2. The rest of the stream would be hosted by Tomoyo Kurosawa, with guests Mafia Kajita, comedian Nobuo from Penguins, and later directors/producers Eiji Ishida and Mitsuru Hirata, who would go over more general information on the game.

Similarly to Shin Megami Tensei V's Daily Demon, a web-series to promote Soul Hackers 2 would be hosted starting from March 10th, sub-titled "Daily Ringo's Demon Prediction." And continuing the recent promotional model of ATLUS games in Japan, Summoners Guide would inform players of the mechanics and details of the game. Both of these series are hosted by Ringo. 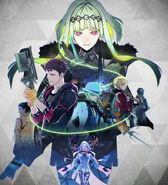 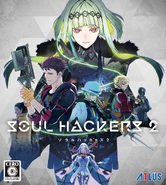 The party at the Safehouse

The map of the city

Only the latest 6 videos are to be listed on this article to avoid clutter. For the full list, see Soul Hackers 2 Daily Ringo's Demon Prediction