Erin Yvette
Sophia is a character in Shin Megami Tensei V. She aids the protagonist in fusing demons. She is the ruler of the World of Shadows.

Sophia is the ruler and maintainer of the World of Shadows, and came from a different plane to assist the Nahobino, aiding him directly by awakening the Nohobino's latent power, using Apotheosis to grant Miracles, infuse Essences to change his affinities to match that demon the Essence belonged to or to give skills based on the innate and learnable skill list of that demon to either himself or his demons, or performing Fusion to provide the Nahobino stronger demons as an edge against the forces that conspire against him.

She will notify the Nahobino when he enters the World of Shadows of new Miracles that have been unlocked from the destruction of Abscesses.

Upon reaching 75% completion of the Demonic Compendium, and the Nahobino returns to the World of Shadows, she will refer herself as the genuine Sophia, the Achamoth and sacred prostitute that gives birth to demonic life, the original matriarch and spirit of Knowledge. She will then give the Seed of Life to the protagonist as a reward, which will unlock an alignment-specific quest with Maria once the Nahobino reaches the Empyrean through the Temple of Eternity.

When the DLC Quest "Return of the True Demon" is purchased, starting as early as unlocking the World of Shadows, Sophia will gift the Nahobino the Menorah of Knowledge, then starts the quest, which will summon Matador in Da'at close to the Tatami leyline fount. Defeating Matador will unlock the next Fiend, in the exact same line up they were fought within the Labyrinth of Amala, cumulating in a fight with the Demi-fiend. She will have unique vocal lines once Hell Biker, Pale Rider, Trumpeter, and the Demi-fiend are defeated and the Nahobino returns to the World of Shadows. 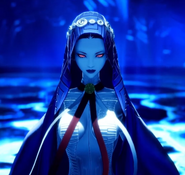 Sophia transforms into a large statue during fusion.