Edit
watch 02:34
Fire Emblem Warriors: Three Hopes - The Loop
Do you like this video?
Play Sound
"A bond made with another person. Getting to know others is the key to strengthening your Personas."
—Persona 3 FES Dictionary entry

Social Links, also known as S. Links and known as Community (コミュニティ, Komyuniti)? in the Japanese versions and often abbreviated as "Commu" (コミュ, Komyu)?, are an important gameplay mechanic that appears in Persona 3 and Persona 4. They were renamed Confidants in Persona 5.

Social Links can, however, be reversed if the protagonists do not spend time with the respective people holding the Link, end up booking two holiday invitations on one day, or give an improper answer during their conversations. The reverse effect will also continue to last until the protagonist reconciles with them. At some point a Social Link can even be broken, prohibiting the protagonist from fusing Personas from the respective Arcana. In Persona 3, most Social Links can be reversed through the aforementioned methods, and dialogue choices that will lead to a broken link are difficult to figure without a guide. In Persona 3 Portable and Persona 4 however, only Akihiko Sanada, Ai Ebihara and Naoto Shirogane's Social Link can be reversed or broken through very specific and obvious dialogue choices, and Links can no longer be broken or reversed by not spending time with their respective characters.

"Thou shalt have our blessing when thou choosest to create a Persona of the {{{SL Arcana}}} Arcana."
—Persona 3 Social Link rank up.

The Social Link system was first introduced in Persona 3. The whole purpose of the Social Link at this point was to give considerable amounts of experience to newly-fused Personas and unlock new ones. Persona 3 FES introduces a new Social Link Arcana, Aeon represented by Aigis.

Social Links in Portable function in the same manner as Persona 3 with some new additions based on the system in Persona 4. Like Persona 4, the protagonist's team members can gain special abilities, such as taking a mortal blow, follow-up attacks and a chance to survive a fatal attack once per fight. However, unlike Persona 4, these abilities are automatically earned for all members when the player ranks up the Fool Social Link (which is automatic throughout the game), rather than from each individual party member's Social Link events. Another similarity is the female protagonist can choose who to date similarly to Persona 4 Social Links.

If the protagonist completes a romanceable S.E.E.S. Social Link before January 31, the protagonist can choose on a New Game Plus who to spend their final moments with on March 5 besides Aigis.

Social Links return in the mobile game, Persona 3 Em. With a total of six Social Links, the protagonist can rank the first six SEES members and Elizabeth for the first time. Unlike the original game, Social Links can only be ranked up during dialogue and free-time events. Since Personas do not level up in this game, maxing Social Links will grant the player unique items.

"Bonds of people is the true power."
—Persona 4 The Animation ending (Beauty of Destiny)

In Golden, S.Links with teammates also give new skills to the Persona of that teammate when the link reaches some certain level (2, 4, 6, etc.), and some functions of the S.Link are moved to higher levels (e.g., taking a mortal blow is moved to level 7; doing so for the protagonist is moved to level 9). Golden also introduces two new Social Links: Jester Social Link & and the return of the Aeon Social Link.

A similar feature based on Social Links appear in both Persona 3: Dancing in Moonlight and Persona 5: Dancing in Starlight, here called simply "Social," exist. Both Makoto Yuki and Ren Amamiya can talk to their party members and velvet room attendants, to learn more about them.

The protagonist can receive points from hanging out with Social Link, responding with the correct dialogue options that gives the most points or giving gifts. However, there are other ways Social Link points can be received after initiating at least one level such as drawing a shrine, performing well in exams or responding with the correct option during a storyline event (e.g. eating the Mystery Food X during the school camp). Carrying a Persona with a matching Arcana will also increase the Social Link points gained when answering correctly. However, in certain cases and events, (such as when Nanako and Ryotaro Dojima are home and they and the protagonist can spend time Gardening together) point gains cannot be influenced by these multipliers. Additionally, in Persona 3 FES and Portable, the protagonists can walk Koromaru at night, which can reward you with Social Link points if a party member accompanies you or you encounter other Social Links when walking Koromaru.

The number of notes displayed when receiving points can imply how many points have been received. The protagonist can get at least one point to a maximum of 3 points if the player picks the correct option. If the protagonist reverses a Social Link, all points gained previously will reset. To undo a Reverse Social Link, the protagonist must reach a certain number of points before the link is fixed or visit the Shrine and draw fortunes.

If a Social Link is maxed out, they will cheer the protagonist up for defeating Izanami.

The Social Links in Golden remain the same, except for the addition of 2 new Links:

This is the general weekly schedule of the Social Links. Sometimes the availability of each Social Link can change due to certain circumstances separate from their schedule, such as the requirement to level up certain Social Stats, or having to complete the current dungeon. Party Social Links will not be available if the dungeon is not yet completed.

Availability of party members will vary randomly until the current Midnight Channel dungeon is cleared. 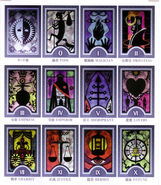 From the Arcana of Fool to Fortune 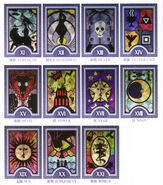 From the Arcana of Strength to World 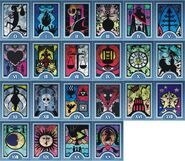 All Arcanas from Persona 3 FES

The female protagonist ranking up the Fortune Social Link.