Snakeman is the Devil Buster in charge of Third Home, as well as the certification and training of new Devil Buster recruits. His constant demon companion is a Garm.

After the completion of ACT 5, he will tell the protagonist that he met a man called STEVEN, who also gave him his first COMP. He then gives the player his COMP: It has +1 Physical Defense and +3 Fusion Slots, making it a very valuable early/mid-level COMP. 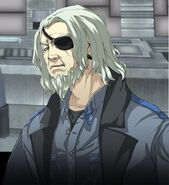 Snakeman with Garm
Community content is available under CC-BY-SA unless otherwise noted.
Advertisement