Slime is a demon in the series.

A slime, also commonly called ooze, are common types of monsters in many fantasy role-play games. True to their name, they don't usually have any distinct shape and appear as large masses of gelatinous fluid. Slimes and oozes vary between mediums, with some being intelligent and capable of assuming basic shapes with others being nothing more than brainless piles of goo that dissolve whatever matter becomes enveloped by their bodies.

Like oozes, many slimes dwell underground, and most secrete an acid from their skin that dissolves flesh and other materials rapidly. In D&D, slimes are essentially blind, but more than make up for that with an ability called "blindsight," which allows them to discern nearby objects and creatures without needing to see them visually.

The appearance of Slimes in the Shin Megami Tensei series are stated to be the result of incomplete, faulty summons of demons. Mara resembles a slime in its botched summoning form.

"Origin: Unknown. The remains of a demon that failed to form. They need Magnetite to materialize in the human world. This is what becomes of them when they don't get enough to fully manifest."
—Shin Megami Tensei A-Mode DDS dictionary

Fusing a Slime with any other demon increases the other demon's HP and MP by 25% of their original values.

"A primitive life form made of a jelly-like substance. Slime have no true origin, though they say these creatures enjoy collecting shiny objects."
—Shin Megami Tensei III: Nocturne profile

Slime can initially be found in Shibuya and later in the Great Underpass of Ginza and Ikebukuro Tunnel. In Shibuya, a failed ritual to summon Mara summons him in the body of a slime (with his typical phallic features).

"A primitive monster with a body of jelly-like, viscous liquid. They have no body parts per se, but rather possess an inorganic structure like liquid metal. They can create their own body parts as necessary and sometimes even mimic other types of creatures.
Their mysterious, jelly-like bodies are very resistant to physical attacks. One theory holds that they are what results when the computer tries to summon another type of demon and fails."
—Shin Megami Tensei IMAGINE compendium

Slime is the first demon you fight in Second Home and is among the Virtual Battle tutorial mobs. It can be contracted in Ueno during the day, Suginami Tunnels bronze/silver/gray instances, Shibuya's Celu Tower bronze and Old Ichigaya Camp's bronze and silver instances. It appears as one of the bosses within DB Watanabe and DB Saitou's hacked chip instances. It is common to see players raising the inexperienced variant as a quick means of acquiring the skill Megidoraon.

"The product of a failed summoning. Bereft of its original powers, it's trapped in an incomplete gel form. Its journey from the Atziluth world to the Assiah world was incomplete in some way."
—Shin Megami Tensei: Strange Journey compendium

Slime is the first demon that appears and assaults the Red Sprite in the game. The protagonist initially fends them off as "unknowns" on the deck and removes them while they are infesting the sickbay afterward. From then on, they appear as random encounter enemies in the beginning areas of Sector Antlia.

A Slime appears alongside Lham Dearg during the combat tutorial. Its weakness to physical attacks is used to demonstrate the basics of the Press Turn system. Slime will then appear in the 2nd and 3rd stratums of Naraku. There are no fusion combinations that normally result in a Slime demon, and the Demolingual App is necessary in order to recruit one. Slime can teach Flynn the Life Drain and Lunge skills through its Demon Whisper.

"The byproduct of a failed summoning. Devoid of its original powers, it's trapped in an incomplete gel form. Its journey from the Atziluth world to the Assiah world was incomplete in some way."
—Shin Megami Tensei IV: Apocalypse compendium

Slime appears accompanied by Legion in the Kinshicho south exit shopping district. While weak, it still grants the Lunge skill and Life Drain skills if they are desired. Or it can be used as fusion fodder.

The Slime appears as the only demon of the Foul race, which can only be faced during a full moon or new moon. It can't be used in battle, but has a essential purpose in fusion: fusing a Slime with any demon will result in a random demon, that varies according with how many times one tries to combine it. If one combines the Slime with the same demon twice, the second result will be different from the first. But fusing it during a full moon, will create a determined Shin Akuma race demon.

Slime has unique dialogue and is the only demon other than Doppelgänger of its clan to not have a CP of 0.

Slime are the first enemies introduced in the Forest of Fairies and become reoccurring enemies throughout the game.

A Slime is responsible for first introducing the party to the contact system in the game and is always the first type of demon encountered in random battles.

"A primitive monster with a viscous body. There are various theories as to its origin, but it is still under debate. Said to compulsively collect shiny objects."
—Persona 3 FES compendium

Slime is a Lv 12 Fool Persona, and is one of the new Personas added in Persona 3 FES. It can be obtained via fusion, or through Shuffle Time when exploring Tartarus' second block, Arqa.

One of the weakest Personas at only level 2 when found, this is the most basic Persona of the Chariot Arcana. It can only be found through Shuffle Time in the Yukiko's Castle dungeon, and requires the protagonist to have started the Social Link with Chie Satonaka to appear.

"A primitive monster with a viscous body. There are various theories as to its origin, but it is still under debate. Said to compulsively collect shiny objects."
—Persona 5 background

Slime is the second Persona of the Chariot Arcana and can be found as a Persona in the Qimranut area of Mementos, with the title "Viscid Rotting Meat." They are the first Persona to learn the Fire Wall and Headbutt skill. When itemized in the Velvet Room, Slime yields a Headbutt skill card.

As a Shadow, Slime has access to the Self-destruct skill, which it will use when left alive during a damaged state. This deals Almighty damage and damages every combatant on the field. This can potentially trigger a self-destruct chain from multiple slimes being on the field.

"The byproduct of a failed summoning. Devoid of its original powers, it's trapped in an incomplete gel form. This is the sad excuse of what a demon becomes when its journey from the underworld Atziluth to the human world Assiah goes wrong."
—Shin Megami Tensei: Liberation Dx2 compendium 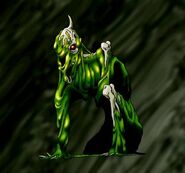 Slime as it appears in Shin Megami Tensei: Devil Summoner

Slime as it appears in Card Summoner

Slime as it appears in Jack Bros.

Slime as he appears in Persona Q: Shadow of the Labyrinth

Slime as it appears in Persona 5 The Animation

Slime in Persona 5 Royal
Add a photo to this gallery

Retrieved from "https://megamitensei.fandom.com/wiki/Slime?oldid=405563"
Community content is available under CC-BY-SA unless otherwise noted.