Skuld is a demon in the series.

Skuld is one of the trio of Norns in Norse mythology, who decide man's fate (alongside Urd and Verdandi). She is also said to be a Valkyrie, appears in at least two poems as one. Her name possibly means either "debt" or alternatively mean "necessity" or "what shall be."

Skuld appears as the highest leveled Persona of the Priestess Arcana and can only be summoned by fusing the spell cards of Fafnir and Ouroboros with the Avenir Totem, gained by returning Urdr.

Skuld is one of the time maidens who live in the Orgel room inside Lucifer's dark palace. Darklord and Lord Light left all their tasks to the three maidens. She is the keeper of the future. She tells Akira that his arrival had been foretold. In Light Version Skuld mentions that it all began long ago with her two Lords and that Jin must travel to Dem's future in order to obtain Lucifer's gem to change the past. Together the three use their powers to send Jin back in time. Skuld can be recruited after beating the game.

Skuld can be obtained by beating Hoshigami in BattleNet.

Skuld appears in Akira's route, where she is found by him in the third stage of Earth Makai. Separated from her sisters, they are unable to talk for long as Imperius' soldiers arrive and attack. After their defeat she joins the party. In the next stage she sees her sister Urd is surrounded by Imperium troops alongside Akira. The siblings are reunited after the battle. 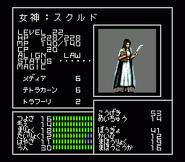 Skuld in the Sega CD remake of Shin Megami Tensei

Skuld as she appears in the story of Devil Children Messiah Riser.