watch 03:19
Wiki Targeted (Games)
Do you like this video?
Play Sound
"True freedom lies within the constructs of society."
—Shujin Academy, Persona 5

Shujin Academy, known in the Japanese version as Shujin High School (秀尽学園高校, Shūjin Gakuen Kōkō)?, is one of the main settings of Persona 5. It is an elite prep school located in Aoyama-Itchome neighborhood in Tokyo.

Shujin Academy is the school which the protagonist and most other members of the Phantom Thieves attend. It is a prestigious upper to middle class school, with higher-ups that only care for its public image instead of its students well-being, and the number of employees who actually care about the student's welfare are a handful few. The students attending Shujin can arrange from young people from middle class families to siblings of media and corporation moguls. It's also the only school which accepted the protagonist due to his criminal record.

The principal of Shujin is Kobayakawa. He is a greedy and lazy man with connections to Masayoshi Shido. The students do not hold him in a high regard due to his mistreatment against them, especially when Suguru Kamoshida was coaching the volleyball team, where he allowed him to do anything he wanted to. He was promptly assassinated when his investigation of the Phantom Thieves failed and his crimes were exposed. After Kobayakawa was assassinated, the vice principal took his place.

The three-floored building is split between the main campus and the practical building. A large gymnasium also serves as an assembly hall. The floors indicate years in reverse: first year classes are on the third floor, while third years on the first. Students are supposedly prohibited from entering the rooftop, although the entrance was left unlocked. The initial Phantom Thieves took advantage of this and used it as their initial hideout. However, it was later locked due to the school realizing students were breaching it.

The first floor has a co-op selling bread and three vending machines: one near the co-op and two at the practical building. The second floor houses the faculty room, the principal's office and meeting room. The third floor is where the student council room, the library and the stairway to the rooftop are located.

When the protagonist first entered Shujin, Kamoshida was allowed by the principal to do basically anything he wanted to do for the sole reason that he was an Olympic medalist, resulting in the disbanding of the school's prestigious Track Team after Kamoshida fanned up an incident directed against its leader Ryuji Sakamoto just to make sure that only his Volleyball team can remain forefront. He then uses his position to assault his athletes (Sometimes even outright visible to crowds of students,) train them in absolutely brutal ways comparable to torture, sexually harass (or occasionally, molest) his female athletes, and spread unfavorable fabricated rumors against students he doesn't like. His unbridled egotism and sense of untouchability and immunity had resulted in him thinking that the school was his castle, forming Kamoshida's Palace. This forces certain students of the academy, particularly the protagonist, Ryuji Sakamoto and Ann Takamaki to use the Metaverse so Kamoshida can be exposed and discredited, as nobody else is willing, or dares doing so.

As Morgana always sticks with the protagonist during his school life, he also enters class with him, and hides under the protagonist's desk. Nobody notices or notes his presence, in spite of employees' early attempts to find and get rid of him from school grounds.

The protagonist cannot visit Shujin Academy past November 18 (The deadline for sending the calling card to Sae) due to having to cover himself up with a fake death, although he is given one last opportunity to visit it on December 22. He can still freely access Confidants that are found at the school during this time.

In Persona 5 Royal, after Kamoshida's defeat and subsequent confession, the school hastily performs public relations stunts to restore its reputation, starting by hiring Takuto Maruki as a counselor for 7 months. Ryuji distrusts him at first because he was clearly hired to amend the school's PR, but he opens up to him quickly since Maruki is a truly kind person, establishing his image in Shujin as one of the few employees who actually do care for the student's welfare. Within these 7 months, all student members of the Phantom Thieves meet him to soothe their feelings, and the protagonist assists him in completing his psientific research. The school also organizes a cleaning trip on May 30th to further amend, although this trip was considered by its students to be boring and an obvious attempt at building goodwill.

Rumors about the school planning to ditch any honor students who do not live up to the school's expectations also began to spread, heavily implied to result in Sumire Yoshizawa's consideration for scholarship revocation in October because she didn't achieve first place.

After the events of the original Persona 5 end with Yaldabaoth's defeat, during the third semester events, the protagonist returns to Shujin Academy and may visit it freely during the remaining time before the game ends.

Shujin Academy makes a minor appearance at the beginning of the game when the protagonist finishes classes and head to Café Leblanc.

Shujin Academy makes a brief appearance, acting as Alice Hiiragi's trauma cell in the Shibuya Jail, containing a Lock Keeper that must be destroyed to remove the barricade preventing the party from approaching Shadow Alice. The Lock Keeper in that area takes the form of one of Alice's school bullies who can be seen trampling her and taking pictures of the humiliation. 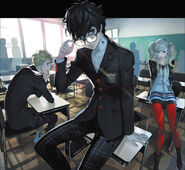 Artwork of the protagonist, Ann and Ryuji in a classroom 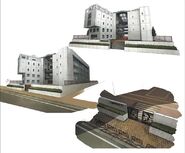 The school's winter uniform for male

The school's winter uniform for female

The protagonist in the uniform

Courtyard stage in Persona 5: Dancing in Starlight
Add a photo to this gallery 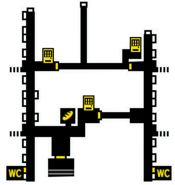 The first floor of Shujin Academy 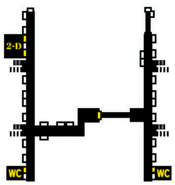 The second floor of Shujin Academy 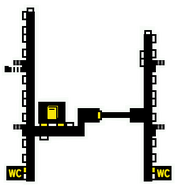 The third floor of Shujin Academy 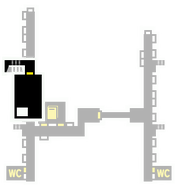 The rooftop of Shujin Academy
Add a photo to this gallery

Retrieved from "https://megamitensei.fandom.com/wiki/Shujin_Academy?oldid=415852"
Community content is available under CC-BY-SA unless otherwise noted.