Heat
"I am Nataraja, the destroyer of all. I shall ascertain if you are worthy to face Brahman. If you cannot defeat me, then your world does not deserve to exist."
—Shiva, Digital Devil Saga: Avatar Tuner 2

Shiva is a demon in the series.

In the Hindu religion, Shiva the Destroyer is one of the three principal deities of the Trimurti (Hindu Male Triad) along with Brahma the Creator and Vishnu the Preserver. He originally evolved from the early Vedic god, Rudra, and is now the supreme deity within Shaivism, a branch of Hinduism that focuses on the worship of Shiva. While he is known as the destroyer, he is also considered to be a benevolent and beneficial force, as without destruction, new creation couldn't take place. He also acts against premature destruction, going far enough to withstand great suffering. He is depicted with up to four arms, a third eye, a blue throat, matted hair, carrying a trident and a drum, is often accompanied by a serpent and rides on the back of the sacred bull Nandi.

The first of Shiva's best known attributes is his third eye, which he once used to burn the god of love, Kamadeva, to ashes. The effulgence from this act was so hot that not even the god of fire, Agni, could handle it, and was used to create the war god Kartikeya. Shiva also has a blue throat that was caused when he swallowed the most deadly poison in the world, Halahala, the poison of the primordial snake Vasuki, earning him the name Vishakantha (one who held poison in his throat). This act is further proof of his benevolent and self-sacrificing nature.

He is the husband of the goddess Parvati, or Shakti, in all her incarnations and has two sons, Ganesha and Skanda. He also has many incarnations that would go on to become sacred figures in their own right such as Shankara and Hanuman. Shiva is also worshiped in forms born from the fusion of himself and other gods, such as Harihara when fused with Vishnu or Ardhanarishvara when he's fused Parvati or Shakti.

Followers of a religion called Shaktism believe the Shiva is an aspect or reflection of the Divine Mother, or Shakti.

Another name for Shiva is Mahakala, who, in Buddhism, is a fierce protector deity who is equivalent to Shiva.

"Origin: India. One of the three major gods of Hinduism. He is the god of destruction and dance. He has four arms, four faces and three eyes. He is often depicted wearing tiger skin, with pearls and a snake around his neck. It is said that when his third eye opens, its glare can burn anything to ash."
—Shin Megami Tensei A-Mode DDS dictionary

The traditional method of fusing Shiva from Barong and Rangda originated from the first game. Shiva is the highest recruitable Tenma, and, like Vishnu, Shiva cannot be fused with any other demons; the game won't even create a Slime from fusion and will never make any fusions.

Shiva appears as a distinct, powerful demon that cannot be encountered nor recruited by the Demi-fiend. Instead, he can only be summoned once the Demi-fiend reaches level 95 or above and performs the special fusion consisting of the demons Barong and Rangda.

Shiva appears as a powerful event boss, spawning with Nandi, Parvati and Ganesha. Acquiring his plug-in within game requires achieving the highest monthly score within the Ultimate Battle Coliseum and completing the Champion Course. He can be fused by a Kartikeya variant, Parvati and Ganesha. Only after Rangda and Barong's plug-ins were implemented were players also able to fuse him in the traditional double-fusion.

Shiva again can be fused through special fusion between Barong and Rangda.

Shiva returns as a special fusion between Barong and Rangda. The Terminal Guardian uses Barong and Rangda to defend the final terminal; when they are defeated, he fuses them into Shiva and resumes the fight.

"The Hindu creator and destroyer of the world. Also known as Vishnu, Shiva is revered as the highest god. His weapon is a trident of light, and his third eye is said to be able to set the world ablaze."
—Devil Summoner: Soul Hackers 3DS compendium

Shiva can be metamorphosed into the Trishula, the most powerful sword in the game. He is the highest level demon that can be obtained by the protagonist, at level 85. Shiva is also used in the battle with Kyouji Kuzunoha in the Extra Dungeon.

Unlike previous games, fusing Shiva does not require the special fusion of Barong and Rangda.

At level 96, Shiva is the highest-level Persona of the Chariot Arcana. The game does not follow the tradition of fusing Rangda and Barong, instead the protagonist needs to fuse Kwanca and Ganesha and add the Totem Maxi Tempest, dropped by Fenrir. Upon being returned in the Velvet Room at MAX Rank, Shiva produces a Scorching Tablet.

"One of the triad of main deities in Hindu myth. He is known as the destroyer, but is also related to regeneration. His wife is Parvati."
—Persona 3 compendium

Shiva appears as one of the Personas of the Tower Arcana. Following the tradition of Shin Megami Tensei, Shiva's fusion prerequisite requires the protagonist to perform a special fusion consists of Barong and Rangda. Shiva, along with his wife Parvati also grants the accessibility to the Fusion Spell Ardhanari. Shiva is also the only Persona that has access to the skill, Pralaya, which deals severe Pierce damage to all enemies with chances of inflicting Fear status, and is also the strongest All-enemy pierce type skill.

In the remakes, fusing Shiva with a Nihil weapon grants the strongest spear-type weapon, Pinaka.

"One of the major Hindu gods, he is known as the Destroyer but is also related to regeneration. His wife is Parvati."
—Persona 5 background

Shiva is the fifth Persona of the Judgement Arcana and can only be obtained through fusion in the Velvet Room. The protagonist must use Barong and Rangda in a fusion to summon Shiva. He is the second of three Personas to learn the Psycho Force skill and the first Persona to learn Riot Gun and Psycho Blast. When itemized through Electric Chair execution, Shiva produces the Megido Fire shotgun for Ryuji Sakamoto, which has 380 ATK, 98 ACC, fires 3 times per turn and adds the Critical Rate up effect (low) to Ryuji's Gun attacks. Shiva is one of the ingredients required to summon Ardha through a special fusion with Parvati.

"A powerful demon with four arms and a third eye that provides it with foresight."
—Demonary, DemiKids

Shiva has the power DarkBoost.

Shiva appears as an optional boss in the eastern room of the 6th Layer of the Sun 3F, opposite the room in which Vishnu resides. To challenge them, the party must have collected the Pinaka item from Parvati, who can be found from the 5th Layer of the Sun onwards. Shiva will test the party's worth, stating that if he cannot be defeated, then the world does not deserve to exist.

During the battle, Shiva can be damaged by Fire and Ice during the first turn. Anything else will be repelled. From the second turn onwards, Shiva's vulnerability will shift through the elements by one each turn, with his vulnerabilities changing according to this pattern.

Each time he uses Third Eye signifies the turn where all elements can affect him before the cycle resets. Having the Null Nerve skill will prevent the Stun effect from Third Eye, and Dekunda will remove the Rakunda debuff caused by the Ragnarok skill and neutralize his Debilitate.

After being defeated, the Aksara Mantra will become available from the terminals. The party can also collect the Turn Ring from Shiva's chamber, which adds one turn icon for the party.

Once again, Shiva can only be obtained by fusing the demons Barong and Rangda. He is one of the few unique demons that can be fought in a free battle.

"The Hindu creator and destroyer of the world. Along with Vishnu, Shiva is one of the most revered gods in Hindu faith.
He purifies the world through destruction and reconstructs it. Though he uses his destructive force towards demons, he grants blessings to believers.
There are various depictions of Shiva, but the common version has four arms, one face, and three eyes. His weapon is a trident of light, and his third eye is said to be able to set the world ablaze."

Shiva is sought out during the 5th Day because his Pasupata is the only thing capable of shooting Alioth down from its otherwise unreachable altitude. As Shiva is known as the "Lord of Dance," an expert dancer is needed to coax him out; Hinako Kujou volunteers for the job of reviving him. After he and Kama are successfully revived, the myth involving the two gods is reenacted; Kama shoots Shiva with an arrow, and the enraged Shiva incinerates him with his Pasupata, knocking Alioth down in the process.

If the protagonist does not support Daichi, Shiva appears during the fight with Hinako and Jungo. Defeating Shiva unlocks the ability to fuse him in the Cathedral of Shadows. Much like all his other incarnations in the previous games, Shiva can only be fused by fusing Rangda and Barong.

In Record Breaker Shiva can appear in the DLC stages should the protagonists level reach 75, where he will appear as a random encounter with a powerful Garuda and Ananta. The boss music plays for these fights.

Shiva plays his part in bringing down Alioth. However, this version of Shiva does not speak, and the process of summoning him seemed to go faster than in the original game, where the protagonist was required to protect Hinako from multiple demon teams while she attempted to summon him. This time, no such complication existed. Additionally, rather than be provoked from being hit by arrows, Shiva became angry at the sight of Kama himself, which prompted him to immediately throw Pasupata at his rival. In the process, Pasupata hit Alioth's core directly, bringing the Septentrione to a swift death and leaving the shell to fall.

"The Hindu creator and destroyer of the world. Along with Vishnu, Shiva is one of the most revered gods in the Hindu faith. There is a belief that he will destroy the world near its end, purifying it during its reconstruction. He uses his destructive force towards demons and bestows blessings on to those who worship him. His weapon is a trident of light, and his third eye is said to be able to burn evil doers."
—Shin Megami Tensei: Liberation Dx2 compendium

As soon as the battle begins, Shiva appears to assist Hinako.

"How dare you!? I see you haven't been burned enough. I'll grant your wish!"
—Shiva when hit by Kama's arrow 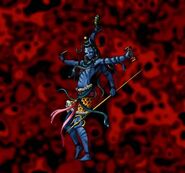 Shiva as he appears in Shin Megami Tensei IMAGINE

Shiva as he appears in Devil Survivor

Shiva in Devil Survivor 2 The Animation