One of the two missing students Touko Aoi asks Naoto Shirogane to look into, Shirou is the student council president at Yagokoro. He is serious and well-respected by his peers, which makes it hard for Naoto to figure out exactly what connected him to the other missing student, Miyuki Midorikawa.

After listening to one of Miyuki Midorikawa's conversations through Sousei Kurogami's Tsukuyomi, Naoto comes to the realization that Shirou was also one of the five judges that presided over the Midnight Site under the handle of Sarutahiko. Although he worked together with Miyuki on the site, he made extreme efforts to not appear to have any relation with her. However, he was one of the first to realize that much of what Miyuki posted as Kaoru Hioka's sins were slander.

He is the second person Kyouhei Hioka attacks, but he survives, turning the situation on the other. Shirou reappears when Kagutsuchi threatens revenge, taking a hostage on the school's roof. 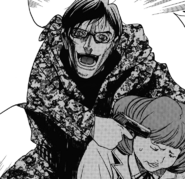