Barbara Goodson (P5/P5R)
Eden Riegel (P5A)
"I wish I was able to talk with them--or something-though... But you fulfilled your part of the deal, so I'll teach you how to shoot."
—Shinya Oda to the protagonist, Persona 5

Shinya Oda is a character from Persona 5. He is one of the best players of the arcade game "Gun About."

Shinya has dark hair and dark eyes. He wears a red cap hat that reads "GET SMOKED" on the front in yellow.

He wears a blue varsity jacket. "NOOBS" is on the front in black, a white "16" is in a red circle under it, and the sleeves are white. The collar, pockets, cuffs and bottom are blue with yellow horizontal lines. He has an elementary school backpack. His blue jeans are rolled up halfway between his knees and ankles, and he has blue shoes with white lace.

Shinya is usually seen as reserved, if not introverted, primarily due to his mother's aggressive and argumentative nature with his school. His actions had led many of the kids at his school to bully him, which he calls a "war" he must win. While playing Gun About, he is focused and sharp, and has never lost a game until being beaten by the current gaming champion due to a cheat. However, when playing with others, Shinya swears up a storm, which he admits is both a habit and problem for him.

Shinya greatly admires the Phantom Thieves due to the fact that they challenge those who abuse their power and is an avid supporter, even after the death of Kunikazu Okumura, which they are framed for. During his Confidant, Shinya comes to see the protagonist as an older brother-like figure, which then becomes great admiration when he figures out that he is a member of the Phantom Thieves.

Shinya is an elementary school boy who plays at the Gigolo arcade of Akihabara, and is known as the gaming genius called "The King." The protagonist meets Shinya in Akihabara at the Gigolo while looking for a firearms instructor to defeat the Shadow Self of Yoshikuni Nejima, a notorious arcade cheat in Shibuya Gigolo (as his cognition of being invincible made his Shadow superhumanly evasive). At first, Shinya is reluctant to teach someone older than him, but upon learning about why the protagonist wants to learn under him, and that he is a student at Shujin, he agrees to teach him, but only on the condition that he receives proof of the Phantom Thieves wanting to deal with the cheater. With help from Futaba hacking into the Gun About website, Shinya agrees to teach the protagonist, and to his surprise, learns that Shinya can be quite foul-mouthed when playing with someone else, as well as a harsh teacher.

His mother is Hanae Oda, a Mementos target with a Shadow Self.

If the protagonist maxed out his Confidant prior to sending out the calling card to Shido, Shinya notes that things become more exciting when they target extremely powerful individuals. Later, like others who formed a strong bond with the protagonist, he expresses shock and bewilderment when Mementos merges with reality. stating that he's not dreaming or inside a game. He also cheers on the Phantom Thieves as they take on Yaldabaoth if the protagonist maxes his confidant, claiming he has always done so and will continue to.

"...According to the reports, it seems your skill at handling a gun is quite impressive. Either you taught yourself... or you had a capable coach by your side... Where did you learn how to handle a gun!?"
—Sae Niijima talking about Shinya Oda, Persona 5

Due to how this Confidant ties into a Mementos request, it can only be unlocked after the 4th September, where the player receives the request "Winners Don't Use Cheats". Shinya is only available in Akihabara during the day, and ranking up this Confidant also increases the protagonist's Kindness.

Shinya's Confidant focuses on his situation at school, and his strained relationship with his mother, Hanae. His mother often complains and argues with Shinya's school, which causes most of the kids to label his mother as a weirdo and bully him. Shinya considers this "a war" he must win due to his mother's influence. He eventually meets the current gaming champion, Takekuma, who challenges him to a game of Gun About, much to Shinya's excitement. However, as they play, Shinya learns that Takekuma was cheating by using a special armor and grows frustrated. Sometime afterwards, kids from Shinya's school approach him, demanding that he return the money he took, though he refuses. He does grow bewildered when one of the kids calls him a bad person and hopes the Phantom Thieves take his heart.

Eventually, Shinya's wavering behavior catches the attention of his mother. When Hanae finds him hanging out with the protagonist, she accuses the latter of being a bad influence on her son and threatens to report him to the police, revealing that she encourages his colder and more bullying behaviors. This eventually leads to the request of taking her heart and making her less controlling and willfully oblivious to how miserable her son is, which Shinya agrees to help with by sending her the calling card the Phantom Thieves prepared for her. After her heart is stolen in Mementos, Shinya says things have improved, and Hanae has apologized to him for her behavior.

At Rank 10, Shinya teaches everything he knows to the protagonist, and notes there's nothing left to show him now. He also invited the kids who harassed him earlier to the arcade, where he apologizes for his actions and promises to pay them back when he's saved up enough money. This surprises the kids, with one of them even asking Shinya to teach him how to play Gun About in a form of reconciliation. Takekuma then returns to the arcade, intending to challenge Shinya once again. Unlike last time, Shinya doesn't lose his cool and easily beats Takekuma in spite of his cheating. He also tells Takekuma that he shouldn't use cheats, as he still has a chance to continue even after everything that will happen. The champion notes they are wise words, and informs Shinya he will not partake in the tournament. The kids, impressed, refer to Shinya as the new champion, much to his embarrassment, and claim that they are the reason he was able to get stronger.

After the kids leave, Shinya says that it is time to return home, but notes that he feels happy. He also reflects that he thought winning was cool, but now thinks that being nice is cool as well. Shinya then says that losing isn't the end, but rather a new beginning. He then thanks the protagonist for his help in overcoming his endeavors, and states that he wants to help others now as well, like his mother, friends, and even those he doesn't know. He then asks if such ideals could help him become a member of the Phantom Thieves. Depending on the protagonist's response, Shinya either reveals he is aware that the protagonist is a member, or expresses great shock when the protagonist tells him he'll let him in. Regardless, he promises not to tell anyone, but sadly realizes that this might be the last time they play together, as he has nothing left to teach the protagonist, and the Phantom Thieves are going through tough times.

Shinya then thanks the protagonist for hanging out with a lonely kid like him, and leaves after the two perform a fist bump as a sign of their friendship. 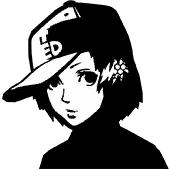 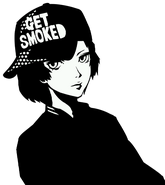 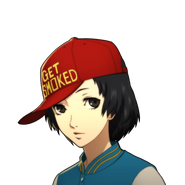 Shinya shares his surname and the first kanji of his given name with the infamous warlord Oda Nobunaga (織田 信長). Nobunaga was known to have introduced firearms to aid his military expansion, in particular having invented the rotating volley strategy.