Shinichi Yoshizawa is a character in Persona 5 Royal. He is Kasumi Yoshizawa and Sumire Yoshizawa's father.

Shinichi is a bespectacled, middle-aged man with short black hair and red-edged glasses. His glasses are picked by the protagonist for him. His winter outfit is an orange-brown trench coat, and he wears a pair of light brown slacks.

Shinichi is very protective of his daughters, to the very point where he comes as overprotective. He would more often than not call Kasumi (actually Sumire) back if she took too much time hanging out with others. Despite this, he genuinely cares for both siblings as a parent as he is seen mourning over Kasumi's death. When Sumire was guilt ridden by it because Kasumi sacrificed herself to prevent her from getting ran over by a car, he pushed her to Takuto Maruki so she can seek help within a very short time period, something that has actually proven a breakthrough for her worsening mental health even if Maruki became insane much later on. It was also heavily implied that he is keeping tabs on Sumire in order to prevent her from actually committing suicide once the cognitive manipulation wears off.

Shinichi is the father of the Yoshizawa twins and the director of "Good Morning Japan," a rather famous talk show where Goro Akechi was often interviewed. Therefore, Akechi knows him very well. He does not make personal appearances prior to the third semester events and most of his role in the base campaign is spent on calling Kasumi home once she hangs out with the protagonist for too much time.

On the 1st of January, the protagonist meets him personally after the new year hangout with Kasumi, in which Kasumi introduces the protagonist to him. He calls Kasumi home because all of her relatives are at there, where the protagonist can sense him call her "Sumire." It turns out that when he calls Sumire "Kasumi," he was never actually saying it, but Sumire only heard him addressing her as Kasumi due to the spell that she asked Maruki to cast on her.

During a flashback displayed to the protagonist, Akechi and Kasumi on the next day when infiltrating an unknown Palace, he can be seen mourning the death of what appears to be Kasumi's sister. He is grief struck and in disbelief, stating that "a girl" might come once she calms down. While the deceased sibling appears to be Sumire, it's actually the real Kasumi, and the flashback is displayed to Sumire by Maruki in hopes of preventing the trio from interfering with his utopian plan. 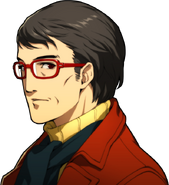 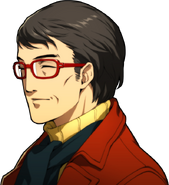 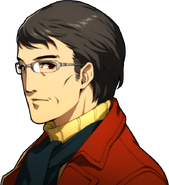 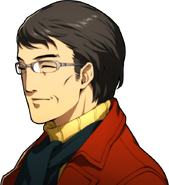 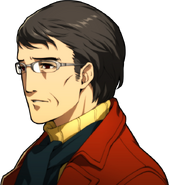 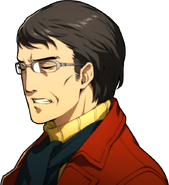