November 11, 2021
"The ambitions of god and human clash amidst the horror of a dying world. Neither human nor demon, the newly-forged Nahobino and his friends must decide what is worth saving... and prepare to sacrifice everything in its name. In a world without its Creator, which path will you choose?"
—Shin Megami Tensei V English website

The protagonist, a high school student living an ordinary life, wanders into another world called "Da'at." He then fuses with a mysterious man Aogami and becomes a "Nahobino," a condemned being. Returning back in the real world with some of his classmates who also found their way in Da'at, they are informed about demons bleeding into their world, and are invited to join Bethel, an organization that fights these demons, which they accept.

After getting accustomed to their normal lives as high school students, an emergency arises, where the protagonist's high school, Jouin Academy, has been raided by demons.

There is also an alternate edition, which includes just the game and a Jack Frost pin inside a black box. It can also be bought together with the limited edition of the game for 16,280 yen. 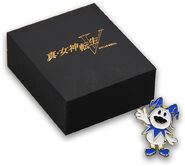 The Fall of Man Premium Edition, sold in the West, includes:

There is also an alternate Steelbook edition, which only includes the steelbook.

"All the fountains of the great deep broke up and the windows of heaven were opened. In this lightless age of corruption we long for the dawn of a new messiah."
—Shin Megami Tensei V Announcement Trailer

Producer Kazuyuki Yamai has said in an interview with Famitsu that he wants Shin Megami Tensei V to sympathize with the troubles that the world is currently going through such as terrorism, nuclear weapons, unemployment, the uneasiness about life retirement and other troubles at home and abroad. He wants people to look at the "characteristics of the time."[2]

Shin Megami Tensei V is developed in Unreal Engine 4, the first time the engine is used by the developers. In the same interview, it was mentioned that said engine creates a new environment to work with when creating games as it allows them to create something and immediately check it out on the game screen, it gives the creators more time to spend on coming up with ideas and trial-and-error.[2]

The game is expecting a release on the Nintendo Switch. On the team's choice of console, Yamai has expressed that the Switch is "charming," due to its ability to let users play HD quality games freely on the go. He also remarked about its flexibility as a hybrid console.[2][3]

In a 2017 trailer of the game, the keyword "Shekinah Glory," which translates to "God's Miracle" could be spotted. Yamai wants players to think about that keyword, and get a "true understanding" of it once they play the game.[2]

The game was first teased on January 13th 2017 as "Shin Megami Tensei HD," or a "brand new work in the series," later revealed to be its fifth installment in October 23rd during a livestream, and that it would plan release on the Nintendo Switch.

A few days later after the announcement at E3, on June 17th, a Daily Demon series was started on Atlus JP's YouTube channel (atlustube), which showcases a certain demon from the game each day, and the pace would eventually accelerate to two videos a day. This campaign will go on until the release of the game, showcasing a total of 214 demons.

In addition to that, another series, called "Shin Megami Tensei V News" began on June 21st, showcasing and explaining information about the game. It follows a format of a regular real-life news program, with Chiaki Matsuzawa as its announcer. Although the videos have been uploaded only in Japanese, they have been given official subtitles in English, Korean and Traditional Chinese.

Another minor series is "Osamurai-chan's Megaten Challenge," a side quiz show on guessing demons hosted by Japanese comedian Osamurai-chan. It has only been captioned in Korean and Traditional Chinese.

The game is also planned to make an appearance on Tokyo Game Show 2021 on October 2nd, where unreleased footage and a live playthrough will be displayed.

Aside from publicity events and YouTube series, the game has also been promoted in Japan via merchandise (specifically upcoming Nintendo Switch accessories,) and the Demon Colosseum, a limited-time lottery event hosted on the game's website.

The protagonist fused as a Nahobino 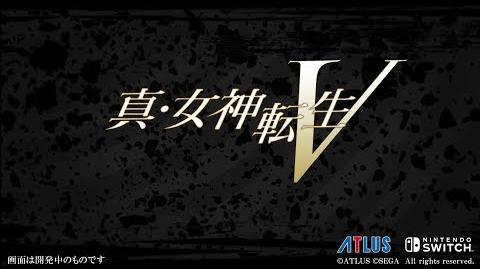 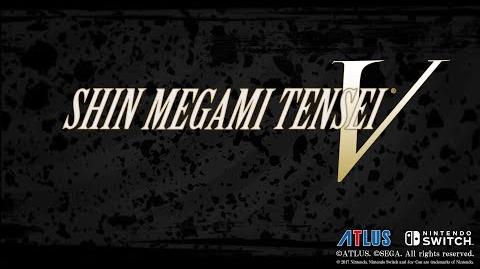 Only the latest 6 videos are listed on this article to avoid clutter. For the full list, see Shin Megami Tensei V Daily Demon