Shin Megami Tensei IV was first revealed by Atlus on May 29th, 2012 in the Japanese gaming magazine Famitsu along with the announcement that a first trailer for the game would be included in all releases of Devil Summoner: Soul Hackers for the 3DS.

The game was developed by Atlus's internal Team Maniax and directed by Kazuyuki Yamai who previously worked on the Maniax edition of Shin Megami Tensei III: Nocturne and the Devil Summoner: Raidou Kuzunoha games. Eiji Ishida, the art director of Shin Megami Tensei III: Nocturne and Shin Megami Tensei: Strange Journey has returned for this game as well. For the first time in the series, character and demon designs were not handled by Kazuma Kaneko, who instead provided story concepts. Instead, Masayuki Doi designed the characters while various artists related to Tokusatsu media were tasked with the demons. The music is composed by Ryota Kozuka, who also worked on the opening of the 3DS release of Devil Summoner: Soul Hackers.[4]

Consumer software chief Naoto Hiraoka explained that Shin Megami Tensei IV will feature a proper evolution of the series' mechanics and its gameplay along with a battle system that will retain influence from past titles. As such, Ishida noted that the feeling of wandering and surviving in a chaotic world has been improved extremely and the world is said to feel even more "desolate" than before. Furthermore, it was explained that the game includes approximately 400 demons - the highest number in the whole series.

A new trailer was shown on September 17th, 2012, providing a first look at in-game graphics and the new characters and demons that will be featured in the game. An expanded version of said trailer was also shown at the Tokyo Game Show 2012. The Nintendo Direct broadcast from February 21st, 2013 included a new trailer for the Shin Megami Tensei IV that detailed various gameplay elements and included some new event scenes.

After having a prophetic dream where he is told he will change the world, Flynn, a lowly Casualry living in the Eastern Kingdom of Mikado, attends the Gauntlet Rite, the country's coming-of-age ceremony, with his childhood friend Issachar. The Gauntlet Rite will determine if they are chosen to become Samurai, an elite army tasked with protecting Mikado from the demons coming from the caves of Naraku. Flynn is selected while Issachar is not, and he is given a Gauntlet, containing the navigator app Burroughs and demon-fusing app Mido. Flynn becomes acquainted with Walter, Jonathan, Isabeau, and Navarre, who were also chosen during the same ritual, and begins training with them. Out of disdain for Flynn and Walter being Casualries, as well as Jonathan and Isabeau sympathizing with them even as Luxurors, Navarre attempts humiliate and endanger the former by feigning a demon attack, only to become caught in the demon's Domain. After Flynn rescues him, he becomes traumatized and drops out of the Samurai.

Meanwhile, books are being distributed around Mikado, with rumors of some citizens holding Sabbaths to summon demons in the Kiccigiorgi Forest. One night, the forest catches on fire, and while rescuing survivors, the Samurai find Issachar turning into a demon, having realized the disparity between Mikado's caste system after reading the books coupled with his resentment of failing the Gauntlet Rite. Flynn and the Samurai are forced to fight him until he dies. The Samurai learn that the Black Samurai was the person distributing the books and that they were turning humans into demons. Hugo, Gabby, and the monastery assigns the Samurai with the task of capturing the Black Samurai, believing that she may have escaped through Naraku. The Samurai traverse through Naraku past any point they were previously allowed, only to find themselves in Tokyo, known to them as the land of the "Unclean Ones." There, they discover that Tokyo is sealed in a dome, keeping the city in eternal night, while Mikado is the land that rests above the dome.

As the Samurai search for the Black Samurai in the demon-infested Tokyo, they learn that she has escaped to Ikebukuro through a tip from Hikaru. Meanwhile, they encounter two factions in Tokyo among the demons: the Ashura-kai, a yakuza group led by Tayama attempting to co-exist with demons by having them consume Red Pills instead of humans; and a cult called the Ring of Gaea, who is in a power struggle with the demons and the Ashura-kai. The Samurai personally witness a territorial fight from Kaga, a Ring of Gaea member who dies while getting revenge on a demon. At the same time, a group called the Counter-Demon Force, led by Fujiwara, act as Tokyo's equivalent of the Samurai in Mikado to protect humans. Once the Samurai reach the Juraku Bookstore in Ikebukuro, they find the Black Samurai and she surrenders, allowing them to arrest her.

In Mikado, the citizens celebrate the Black Samurai's defeat by holding a public execution. Upon unmasking her, everyone is shocked to find that she has the same face as Gabby. The Black Samurai reveals the books distributed to the citizens were plain books with no magic, and that the knowledge within them had turned the citizens into demons after they learned the truth. After she is executed, Gabby enlists the Samurai to help her rescue three men trapped in Kagome Tower. After the Samurai complete the mission, they learn that, while they were away, the Black Samurai suddenly came back to life and fled to Tokyo again. This time, Samurai are ordered to kill her, but they are suddenly given a mission from Tayama, the leader of the Ashura-kai, who orders them to kill a demon affecting his business. After they do so, he puts out a hit for Yuriko, the leader of the Ring of Gaea.

The Samurai travel to Tsukiji Hongwanji to infiltrate the Ring of Gaea's temple, but they do not find her. As they leave, the Black Samurai appears, revealing herself to be Yuriko as well as the demon Lilith. Walter finds himself agreeing with Lilith about creating a society where demons and humans can be equals regardless of status and becomes curious when she taunts them about their ignorance. He stops Jonathan from killing her, after which she suggests they should inspect Tayama's secret facility under the Roppongi Hills building before deciding which was the "true evil." Walter runs off to investigate, and Hikaru directs him to Fujiwara.

After catching up to Walter, the Samurai meet Fujiwara and Skins, who reveal they are familiar with Mikado and hope to emigrate there with several others as the demon attacks are getting stronger. Fujiwara assists the Samurai with finding the facility by telling them to access it through Midtown, which leads them to Reverse Hills. There, the Samurai are horrified to learn that Tayama has children kidnapped and groomed from a young age to eventually have their brain neurotransmitters be harvested as ingredients for the Red Pills.

After defeating a demon and returning to Tayama, the Samurai are summoned back to Mikado to meet with Gabby at Shene Duque. Gabby reveals her true identity as Gabriel, and the three men she had asked the Samurai to rescue are the other Archangels. She explains that 25 years ago (1500 years in Mikado's time), when the demons began invading Tokyo, a dome was formed above the city and several humans chosen by God were transported with a cocoon to live there. To stop the demons again for good, the Archangels plan on waging war by destroying Tokyo and purging any demonic influence from Mikado, including some of its own citizens. They also deny entry to Fujiwara and his group.

When the Samurai set off on their mission, Walter loses trust in the Archangels and compares their actions to Tayama's, believing that the demons are needed to restructure the world. On the other hand, Jonathan remains loyal to the Archangels and insists that Lilith must be killed. Meanwhile, Isabeau becomes conflicted; she opposes the demons, but she also cannot fully support the Archangels, as they are only interested in protecting their own instead of all of humankind. While she withdraws from the mission, Flynn has the choice of accompanying Walter to seek advice from Lilith or Jonathan to kill her. Regardless of his decision, they learn that Lilith wants to secure the Yamato Perpetual Reactor, a device that Tayama controls in Camp Ichigaya, which not only provides electricity to Tokyo but is also an inter-dimensional portal that can allow more demons into Tokyo.

Once the three arrive Camp Ichigaya and the Yamato Perpetual Reactor is activated, it takes them through the Expanse to two alternate versions of Tokyo: Blasted Tokyo, where the angels have won the war and destroyed Tokyo, leaving the humans who were not chosen by God to be poisoned by Pluto as per His will; and Infernal Tokyo, where demons have won the war and ruled by Kenji, who gives all humans the choice to become Demonoids or Neurishers. Both versions of Tokyo have Akira, who in Blasted Tokyo, desires chaos in his world to inspire others to fight back; and, in Infernal Tokyo, wants to maintain order among the demons. Flynn, Walter, and Jonathan defeat both Pluto and Kenji and use the Yamato Perpetual Reactor to travel both times. After passing through the Expanse with Kenji's defeat, Flynn is transported to meeting The White, who give him the choice of destroying the entire universe after witnessing how the world will always be in conflict regardless of choosing law or chaos.

If Flynn accepts the White's proposal, the game ends prematurely with the Nihilism ending, where he destroys the Yamato Perpetual Reactor and causes a black hole to form, swallowing and destroying the universe.

If he refuses, the game will continue on the path of alignment determined through the choices made throughout the game.

Official art of the protagonist, Jonathan, and Walter 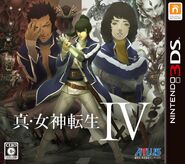 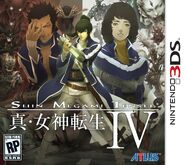 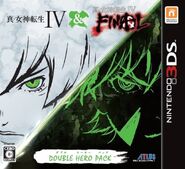 The packaging for the Japan-exclusive Double Hero Pack