December 31, 2008
Shin Megami Tensei IMAGINE was an MMORPG developed by Atlus through a partnership with CAVE. It was originally released in Japan in 2007 and distributed in North America by AeriaGames and Entertainment in late 2008, but in 2012 it was announced that control of the online would be transferred to Atlus Online which later became Marvelous Online. At the end of February 2014, the North American server-- the final international server for the game --terminated its service. Service for the game in Japan ended on May 24, 2016. However, members of the player community managed to create a private server to make the game playable again.

IMAGINE used a "free to play" model, in which micro transactions are an option for purchasing special items, equipment, and outfits. The game features demon summoning and other gameplay features from the previous games, as well as costumes and items that reference older titles.

This game describes an alternative view of the future where the Earth is overrun by demons. After years of humanity warring amongst themselves, a wide-scale destruction finally put an end to the war, forcing humanity to retire to underground shelters.

Shortly thereafter, demons began invading in the aftermath of the Great Cataclysm. The player takes on the role of a Demon Buster (or DB for short), who fights and interacts with demons of Shin Megami Tensei lore, in addition to having the option of siding with either the Law or Chaos faction, each with their own vision of how the world should be rebuilt.

In the Tokyo of IMAGINE, sometime around the 21st century (Year 202X), survivors of a war known as the "Great Cataclysm" live in small constructed shelters awaiting the day when humanity can be rebuilt. These survivors, led by a group known as the Seven Philosophers, construct a massive tower which eventually became known as Shinjuku Babel. The remaining survivors then retreated underground and constructed a refugee city known as Third Home.

The ongoing war between Law and Chaos 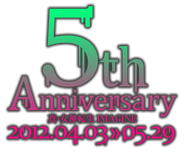 Promo for Another World

A promotional illustration of Chizuru and Fei for Chain of Curse

A promo for the Demi-fiend boss event

Another promo for the Demi-fiend boss event

Another promo for the Demi-fiend boss event