In Japan, the release was limited in production, but at the request of fans, the game was re-released only one more time a year later.[2]

"An average level of difficulty."

The normal difficulty of the game.

"A level of difficulty suitable for those seeking the thrill of death."

There is no extra reward or clear mark for beating the game on Hard Mode, so it is mostly for the extra challenge and bragging rights. 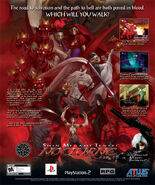 The title of the game (Maniax) comes from the fact there were many "maniac users" that played the original many consecutive times. Since Maniax has many new additions and takes longer to complete, director Yamai jokingly considered calling it "Shin Megami Tensei III: Nocturne Masochist." [3]