Being a commemorative work the drama CD began as a "Radio Drama" and aired on Sakurai Studio and later on sale as a drama CD. The story follows a brand new character named Ryougo who gets turned into a fiend as well by Lucifer.

In this adaptation, the Demi-fiend is named Naoki Kashima (嘉嶋 尚紀). 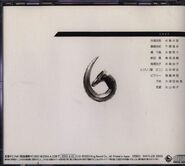 Back cover
Community content is available under CC-BY-SA unless otherwise noted.
Advertisement