September 25, 2003
Shin Megami Tensei III: Nocturne is the fifth installment in the Shin Megami Tensei series, released for the PlayStation 2. It was the first true addition to the main series since the original Super Famicom release of Shin Megami Tensei: if... nearly a decade prior. This version of the game was only released in Japan and South Korea.

The game received multiple versions and remasters over time. One would be the "Director's Cut" entitled Shin Megami Tensei III: Nocturne Maniax, which featured a number of new additions and adjustments. The Maniax release featured Dante from the Capcom Devil May Cry series as an optional companion and story arc. That would be the first version of the game to be localized to the west, titled simply Shin Megami Tensei: Nocturne, and in the PAL regions as Shin Megami Tensei: Lucifer's Call.

A later edition, called the "Maniax Chronicle Edition" was released with a limited "plus" version of Devil Summoner 2: Raidou Kuzunoha vs. King Abaddon in Japan. This release featured Raidou and his feline sidekick Gouto in the place of Dante.

In 2020, an HD remaster of Nocturne was announced to be releasing for PlayStation 4 and Nintendo Switch, and later on Steam consecutively with its Western localization.

In Shin Megami Tensei III: Nocturne, the player takes on the role of a young boy who is caught up in the apocalypse while visiting his sick teacher, Yuko Takao, with his two classmates Chiaki Hayasaka and Isamu Nitta. The player must survive in the Vortex World with the new powers and capabilities given to him through Magatama obtained from Lucifer. With these powers, the player is given the opportunity to align themselves with a Reason that decides what the world will become.

The Demi-fiend - The protagonist that can be named by the player. After the Conception, fate bestows upon him the ability to change this new world. Shortly after starting the game he is transformed into a demon, yet maintains his human heart. The Demi-fiend is also an optional boss in ATLUS' title Digital Devil Saga: Avatar Tuner.

Chiaki Tachibana - A friend of the protagonist who is from a rich family. She has to have her way most of the time. She survives the apocalypse and wanders about the ruins of Tokyo looking for power. She eventually decides to bring the Reason of Yosuga to life, where only the strong survive and maintain power over those who are weak.

Isamu Nitta - Another of the protagonist's friends that survived the Conception, Isamu follows the Reason of Musubi, a philosophy focused on individuality.

Hikawa - Hikawa is the head of the Cybers Corporation, as well as the Cult of Gaea. He is the one mainly responsible for sending the world to its end, and he did it so that he could recreate it based on his ideals, which he calls Shijima. He can summon demons, and starts the Assembly of Nihilo where they work toward a world of silence.

Yuko Takao - Also known as the Maiden. Yuko is the protagonist's teacher as well as a member of Hikawa's Cult of Gaea. She participated in the Conception so that she could create a world of freedom, but comes to find that she is merely a tool for Hikawa. She struggles to find her Reason while being blindly guided by the 'goddess' Aradia.

Jyoji Hijiri - A reporter for a magazine that covers the occult. He appears to have survived the apocalypse and tries to stop Hikawa from completing his plans. Hijiri studies the terminals in each city hoping to learn more about them. He is a big help at the start in gathering info and guiding through the Amala Network, but soon his obsession over the Network gets him into complex situations.

Futomimi - He is the leader of the Manikins. He has the ability to see into the near-future.

Sakahagi - Sakahagi is a violent Manikin who skins his own kind to make clothing for himself. He has a dream to become king of the demons.

The Young boy and Old Woman - These two appear every so often around the Vortex World. They were responsible for giving the protagonist his demonic powers with the hope that the hero would keep the young boy 'entertained'.

The Old Man and Young Woman - These two sit in the deepest part of the Labyrinth of Amala, but can heard and spoken to via use of various peepholes. The woman knows many secrets about people and places, and encourages you to gather the Candelabra and reach the bottom of the labyrinth as the Old Man wishes.

Dante - He survives the apocalypse and is hired by a strange employer to hunt down the Demi-fiend, appearing only in Nocturne Maniax. He is also considered one of the Fiends, as he holds a Candelabrum. Dante is from the Devil May Cry series of games by Capcom for the PlayStation 2. He can also be seen in Capcom's Viewtiful Joe.

Raidou Kuzunoha the XIV - The star of the Devil Summoner: Raidou Kuzunoha game series, along with his sidekick Gouto-Douji. He replaces Dante in Nocturne Maniax Chronicle.

The battle system functions like the traditional RPG turn-based combat, but with one key exception: Nocturne introduces a new element in the form of Press Turns. Each character participating in combat, friend and foe alike, provides one or more Press Turns (more usually denoting a boss) represented in the upper right-hand corner of the screen as icons. The rule behind this system is that any action, such as attacking, using skills, items, contacting demons and summoning commands, will normally cost one full turn, but if a combatant scores a critical hit, exploits their opponent's weakness, or passes on making an action, their turn will be considered half used, which is marked by a pulsating Press Turn icon. These half-used turns allow a character to do anything that a regular turn can but will always expire, even if a "half turn" option is again selected, however if actions resulting in only half a turn being used continue, any remaining full turns will be changed to half turns before any half-turn icons are consumed.

This double-rewarding, double-punishing battle system has received generally good criticism among RPG players due to the extreme difficulty of it and the necessity to fight "smart" rather than "tough". To date, Press Turn combat has since appeared in the Digital Devil Saga series, Shin Megami Tensei IV and IV: Apocalypse, Shin Megami Tensei: Liberation Dx2, and, albeit slightly altered, Persona 3, Persona 4 and Persona 5.

A key theme in Nocturne is that of demon conversation and negotiation. Since the Demi-fiend can only (normally) have one press turn by himself, he must gain allies to fight alongside him in order to have a better chance of survival. Demon negotiation is a unique system in which the speaker (usually, but not always, the Demi-fiend) tries to persuade an enemy demon to join their party. There are two restrictions on negotiation:

1. There must be at least one open space in the party stock.

2. There cannot be a demon of the same species in the party (i.e. You cannot recruit a Power if you already have one in your party).

Requirements for recruiting demons vary by their race, gender, and affiliation. For example, some demons (such as Incubi or Succubi) can be bribed with money or items, while others (such as Angels or Archangels) may only ask a philosophical question ("Do you envy how plants live?"). Some can be seduced by a beautiful speaker, some can be flattered, and some will even join without a moment's hesitation. However, some may refuse to join based on opposing ideals (Tyrants, Deities, Raptors, Megami, and Viles), higher levels, because they don't feel like it, or because they simply can't understand human speech (Foul, Haunt, and Wilder).

Demon negotiation, however, is radically altered when the "moon", Kagutsuchi, is full, as it causes demons to be agitated and drunk with power. Demon conversation will always fail against bosses, any demons inhabiting the Labyrinth of Amala, and any demons fought in the Amala Network (though they will sometimes join of their own accord).

The main character gains his skills through the use of Magatama. Magatama are living parasites that grant the host demonic powers which reflect as access to a variety of skills. There are a total of 25 Magatama in the game. Leveling particular Magatama can also affect demonic conversations with particular demon types. Magatama work in the following way:

The main character is only allowed up to 8 skills. If he has reached his limit and wishes to learn a new skill, he must replace one of his previous skills with the new one learned.

Playing New Game Plus cycle after beating the game once will automatically raise certain parameters in the game, making it much more difficult:

Special DVD from the Making Of 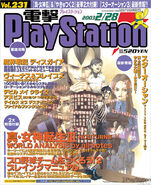 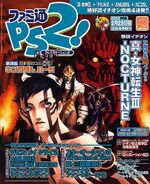 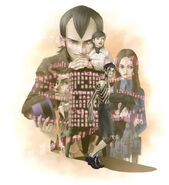 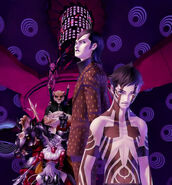 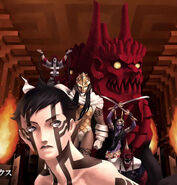