Of young men and women, lost in the Expanse..."
—Shin Megami Tensei: if... intro

As of now, the game has never received any official translation by Atlus Co, Ltd. The Super Famicom version was fan-translated in English by the rom-hacking group Aeon Genesis on October 25, 2018.

Ideo Hazama, a student of Karukozaka High School who is bullied by his peers, performs an occult ceremony in the school's gym in order to obtain power and get his revenge. As a result, Hazama managed to become the Expanse's ruler under the alias of Deity Emperor and transport the whole school there. The protagonist is one of the school's students who decides to explore the Expanse in hopes of going back home.

At the beginning of the game, the protagonist must choose a partner to accompany them in their journey from a group of four students: Yumi Shirakawa, Shinji "Charlie" Kuroi, Reiko Akanezawa, or Akira Miyamoto. Each partner has a defined route and once one has been chosen, the protagonist is locked on that path. The first three options visit multiple worlds based on most of the Seven Deadly Sins while Akira's route explores a massive tower known as Tower of Confinement.

In this route, Charlie and the protagonist are only preoccupied with going back home and honestly don't care about the fate of the other students. As they are not a threat to Hazama's plan, he sends the two of them back to the human world after the final battle, but the school and all other students remain trapped there forever. The school's disappearance is blamed on an explosion caused by a gas leak. Charlie and the protagonist try to go back to their normal lives, but spend the rest of their days in fear that Hazama will one day come to the human world and try to conquer it.

Yumi and the protagonist want to stop Hazama and save the school. After much hardship, they defeat Hazama and the school building, as well as all living students, is safely returned to the human world. Life goes back to normal as all students try to forget what happened.

Mostly identical to Yumi's Route, Reiko's continues for one extra dungeon after Hazama's defeat, exploring his past and why he decided to get revenge. At the end, Reiko decides to stay behind with Hazama's spirit while the protagonist and the school are sent back to the human world safely.

In the Super Famicom version, this route is only available if the game's cartridge has a save file in which final dungeon is unlocked (or, in Charlie's case, right before the fight with Hazama). In the PlayStation port, it is instead available in a New Game Plus.

Akira and the protagonist try to escape the school via a secret manhole, but end up trapped in the Tower of Confinement. Hazama appears before them saying that escaping is forbidden and starts attacking them with demons. Akira is severely injured and on the verge of death but is saved by fusing himself with the demon Amon. The now half-demonic Akira has Amon's memories and tells the protagonist that Hazama used the Demon Summoning Program to fight his way to the top of the tower and obtain the powers of the Deity Emperor, sealing Amon in the process. After defeating Hazama, Akira tells the protagonist that he and Amon are now one and the same and so he has no place in the world of humans. The protagonist is then sent back while the school and the other students remain in the Expanse.

The PlayStation port features the following: 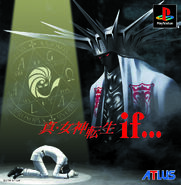 Promotional art for the SNES version 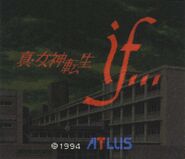 Early version of the title screen