52
Shin Megami Tensei: D-Children Light & Dark is the anime adaptation of DemiKids: Light Version and Dark Version. Much like the DeviChil anime, this is not a direct adaptation of the original games' plot and takes many liberties with its source material.

The anime was originally animated by studio Actas up until episode 26, but changed to Studio Comet starting on episode 27 due to behind-the-scenes problems with Actas and the sponsors. This resulted in many changes to the production staff, including the main director role. It was broadcast on TV Tokyo at the Saturday 9:00-9:30 AM timeslot and ran for 52 episodes from October 5, 2002 to September 9, 2003.

This anime never received a proper home media release, only in the form of rental VHS tapes. As such, it is notoriously scarce in its availability, with episodes 9 through 20 being considered lost media.

Jin, Akira, and Lena are three childhood friends who are one day tasked with cleaning up an old wing of the local library. As they organize the books, the children find an old tome titled "The Great Demon Encyclopedia," containing drawings and descriptions of multiple demons. Out of curiosity, the trio decides to recite a spell contained inside the book, and finds that time has stopped in the human world for everyone except them. They see a vision of a young girl called Ami, begging them to "save Valhalla." After a flash of light, they find themselves in the world of Valhalla, face-to-face with Ami.

Valhalla, which was supposed to be a utopia, is in ruins thanks to a war against the Imperial Army. Ami begs for Jin and Akira's help to end the war, as she believes them to be the legendary Son of Light and Prince of Darkness, respectively. Soon after, the four are attacked by a group of Gargoyles who take Lena hostage. Jin and Akira are initially helpless against the demons, but their strong will awakens their powers allowing the two boys to summon their demon partners: Rand the Sol Lion and Gale the Hei Long. They manage to fend off the Gargoyles, and must now travel through Valhalla in search for the shards of the Time Chain, which will grant them the power to end the war as well as create a portal to the human world so Jin, Akira, and Lena can go home. 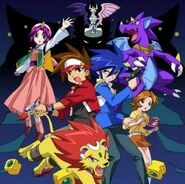