The gameplay and music are taken from Shin Megami Tensei II and Shin Megami Tensei: if.... 20XX has a harder difficulty setting than its predecessors, the Virtual Battler, and a new enhancement known as "Elemental Based-Stats" (which grants an element to the demons and a weakness).

During the year 199X, the sudden appearance of a large number of demons threw Tokyo into a state of chaos. Seeing this, the ambassador of the United States of America, Thorman, initiated an ICBM strike intended to wipe out the demons in one fell swoop, which caused the destruction of Tokyo in the process. 30 years later, with the completion of the Order of Messiah's Cathedral, the Messian's victory was finally guaranteed. At the end of the conflict, those who survived were gathered as one within the Cathedral, and after many decades, what was once known as Tokyo came to be reinvented as "Tokyo Millennium".

It's here that one day, living in the slums of Valhalla, a young delinquent received a COMP from a strange man...

The Hero is an ordinary Valhalla citizen who lost memory as a child, and his only desire is to become stronger. One day Moss introduces the hero to a mysterious man, who gives the Hero a COMP and a Beast Ring, tells him that Valhalla's freedom is being threatened by the Center, and requests the Hero to overthrow its domination. The man also tells the Hero that he must continuously train himself and battle in the Colosseum until he becomes the champion. In the underground district the Hero meets Ain, who has no memory of herself but has the power of a beast, and the two start to venture together through the four sectors (East, West, South, North) of Valhalla's underground districts. Upon exiting from each sector, the Hero participates in the Colosseum tournament and gains victory. In the meantime, Ramedo appears several times in front of the Hero and fights him. In the South Sector, a Jack Frost requests the Hero to give him a Crown of Ice (who possibly later becomes the King Frost in Shin Megami Tensei II). The Hero also learns that the Gaeans have been conducting human experiments and Ain, who was fused with a number of demons, is one of their research products and a weapon against the Center. In the last few battles in the tournament, the Hero battles against Haneda (Haneda Adonis) and Okamoto (Tsune Okamoto) respectively.

However, in a headache Ain gets taken away by the Temple Knights. Finally, the Hero defeats all the opponents and becomes the champion, which grants him the chance to meet Madam in person. The mysterious man from the beginning appears again and tells the Hero that Madam is a lackey of the Center and he should use the opportunity to kill her. Before Madam, the Hero shows little interest in any award but only wants to know where Ain is. Madam is impressed by his purity but warns the Hero that his purity may also be easily exploited by the Center. Then she tells the Hero that Ain could probably be detained in the Heretic Prison.

The Hero enters and rescues many Gaeans detained by the Center (optional). Before meeting Ain, Ramedo appears once again and claims to have become a Temple Knight, and will arrest the Hero. After defeating him, the Hero rescues Ain and escapes the prison, only to find chaos erupting outside and demons spawning on the ground. Moss is also killed by demons, but tells the Hero before his death that the Center has run out of patience with the Gaeans and decides to eradicate them even with demons. At this point, all facilities in Valhalla have been destroyed except Messian churches. The Hero and Ain visit Madam again, where Ain awakens and Madam tells the two to go to Old Ueno to visit Agito, the leader of Gaeans.

Law Route: The Hero visits the Center first and accepts their request to defeat Agito. In Old Ueno, Agito discovers that the Hero comes to defeat himself, thus revealing his true form — Mara. After defeating him, the Gaeans disband and the few believers escape to the Slums. The Hero and Ain swear to join the lawful society under the Center's control. In an additional scene, the elders of the Center are discussing the progress of the Chimera Project (which may refer to the project in which Aleph is born). It is likely that this route is coherent with the story of Shin Megami Tensei II.

Chaos Route: The Hero visits Agito, who requests the Hero to overthrow the Center. After killing Metatron (the true form of one of the elders), the Hero and Ain officially join the Gaeans. In an additional scene, Lucifer seems surprised that the Center is defeated just by Mara, while he has not even intervened. Then Lucifer says that the Center has already eaten the forbidden fruit, and someday they will make a comeback again.

Neutral Route: The Hero and Ain defeat both Mara and Metatron. Knowing they have become the enemy of both Messians and Gaeans, they are determined to pursue justice in their minds. In an additional scene, Taishang Laojun says humans are interesting and always manage to destroy the Gods' plans.

Bad Ending: When the Hero is extremely Chaos-aligned and Ain's headache events occur four times, if the player chooses the Chaos Route, then Ain's demonic power will awaken and overwhelm her own consciousness, which leads to a bad ending. 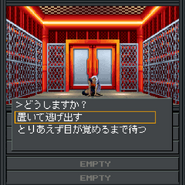 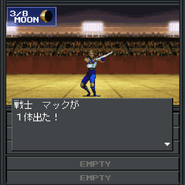 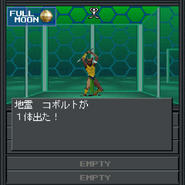 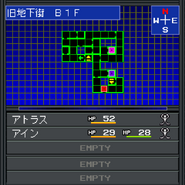 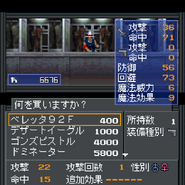 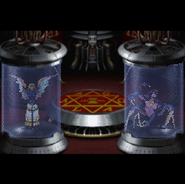